A visit to Lancaster Central Market

Waiting outside the Lancaster, Pennsylvania Marriott Hotel last Friday afternoon, I pulled the hood of my rain jacket over my head, though rain had tapered to sprinkles. When I saw the crossing sign’s white-walker, I made sure traffic had stopped then hoofed it across King and Queen Streets, making my way around Penn Square. Destination: Central Market. Objective: a lunch snack.

The market dates back to the 18th century, before the American Revolution. For one day in 1777 during the Revolution, Lancaster was the capital of the United States when the Continental Congress fled Philadelphia then moved further inland to York the following day. September 27th is Capital Day in Lancaster. The city was also Pennsylvania’s state capital in the early years of 19th century, before Harrisburg took the honors. Now tourists enjoy the beautiful countryside surrounding Lancaster’s historic city, which boasts specialty shops, restaurants, and the Central Market.

The Lancaster Central Market draws vendors from around the County. According its website, the Central Market is, “The country’s oldest continuously operated public farmers’ market since 1730.” Today, it’s open to the public on Tuesday, Friday, and Saturday. More than sixty vendors occupy the municipal’s red-brick Market House built in Lancaster’s Penn Square in 1889. Many stands are multi-generational, run by the same family for decades. And many vendors are Amish.

I zig-zagged up and down the aisles, noting bread and baked goods, pickles and cheeses, pastries and candy, herbs and juices, coffees and teas, crafts and a variety of ethnic food stands, farm produce, meat, poultry and fish, gift items and flowers. Most surprising: The Turkey Lady shop, a celery shop called Sweethearts of Lancaster County, and the Lancaster Pet Bakery—all-natural dog bones and “something for every pet.”

The resident shoppers must have been impatient with tourists and gawkers like me. Since I’d come to Lancaster for HippoCamp, a conference for creative nonfiction writers, I tried to imagine the lives of the vendors, one of whom I overheard talking about rising at 5 am to train for a race. The Amish likely rise early, too, though not to run but to begin the constant flow of chores. 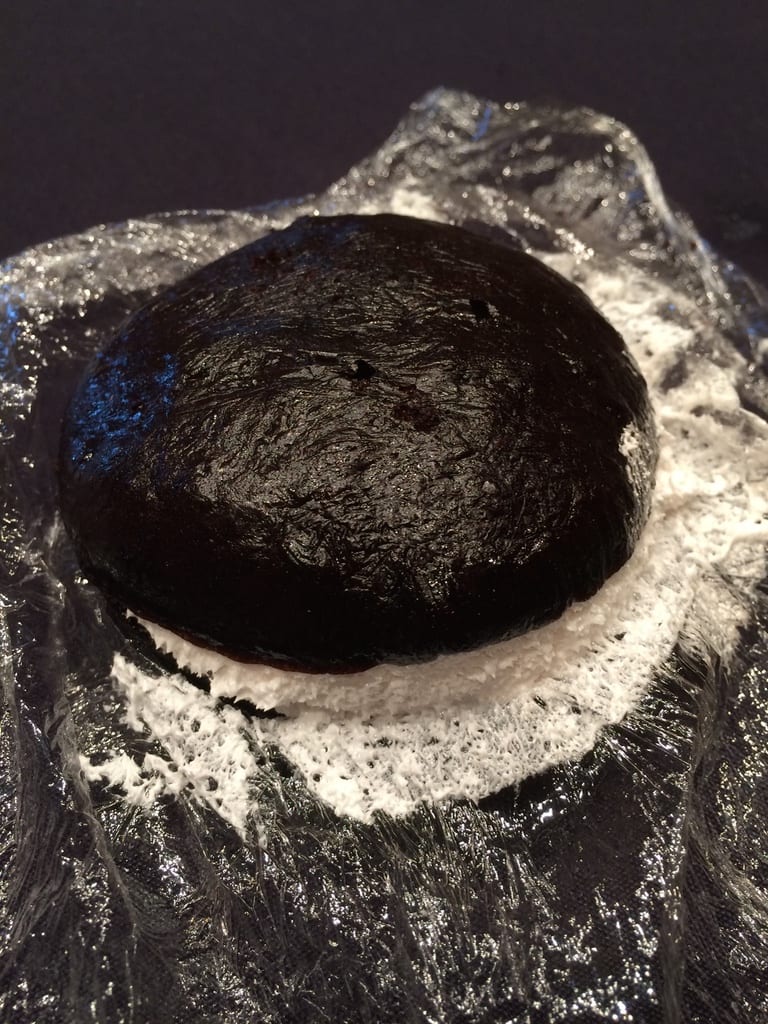 While munching a chicken gyro and unwrapping this homemade whoopie pie, I pondered. What is significant about this place in my life and experiences? Maybe someday I’ll stumble upon an answer, perhaps a nugget of wisdom, and write about it. But for now, I’m grateful for the break in my life that gave me the chance to experience the constancy of others’.

And for the wonderful comradery and growth opportunities during HippoCamp 2019.

And for the taste of an authentic whoopie pie.