Close Encounter of the Snake Kind

“There’s a snake draped on top of the tomato trellis above the square foot garden.”

“I see it now. Maybe its hunting birds or camouflaging itself against hawks.” Birds often perched on the trellis. And a couple of weeks ago, Keith had observed a hawk, swooping down to pick up a two-foot rat snake in our back yard. 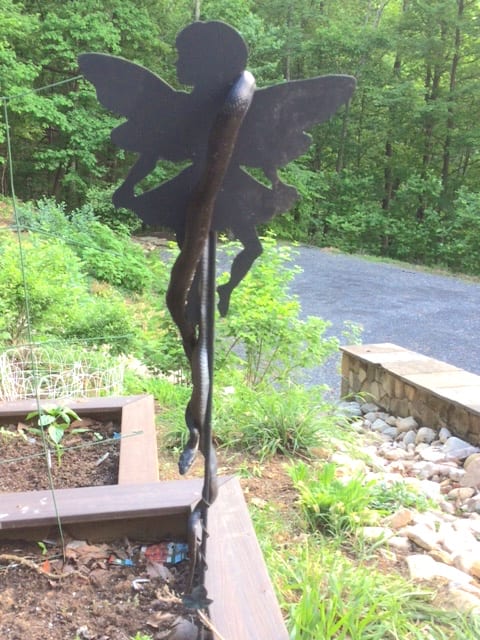 The slender, four-foot-long specimen meandered into the garden then climbed the Tinkerbell pole—another support I use for tomato plants. By then, Keith and I were outside inspecting the fine creature. Wrapped around the pole, it looked like the medical symbol, referring to the Israelites’ experience recorded in the Old Testament—Numbers 21:4-9.

In the wild, rat snakes feed on rodents and birds by biting with their teeth and constricting with their bodies. Though known to bite people, rat snakes are nonvenomous or possess negligible amounts of venom and therefore pose no threat to humans. Many in this family of snakes are docile and make good pets.

So, when Keith sat down to visit with the snake, my only concern was that my presence and picture-taking might interfere with his encounter. (That’s a half-truth. I’m afraid of snakes.) Was my “only concern” justified? That is, could the snake see me or hear the camera shutter click or otherwise sense me? Yes and no, based on the after-encounter research I did on snake sensory systems.

Sight: Snakes do not have well-developed distance eyesight. But up close, their stereoscopic vision serves them well for catching prey. Keith and I were close enough for the rat snake to see us.

Hearing: Though snakes lack external ears, their inner ears allow them to hear low frequency airborne vibrations. Even more acute is the snake’s ability to hear ground vibrations transmitted through its body to a bone between the lower jaw and skull then to the inner ear. The rat snake might have heard airborne vibrations of us and would most certainly have heard us if it had been on the ground.

Smell and Taste: As in lizards, the two senses of smell and taste combine in snakes. They breathe through their two nostrils and smell with their tongues. An organ in the roof of a snake’s mouth transforms the air’s scent-particle information provided by the tongue’s tasting into olfactory information.

Touch: As one might guess, snakes are very responsive to touch. Tactile receptors throughout a snake’s body sense the slightest change in the environment, allowing it to make quick adjustments. During social encounters, touch and smell become the primary means of communication.

And so, it was with Keith. Though I saw the close encounter, I stepped away right after taking this picture and missed the money shot. The snake extended its body 18 inches from the pole and tongue-licked Keith’s nose.

Apparently, Keith did not taste-smell like food or his warmth of shelter, because the snake slowly recoiled back to the pole. Had Keith touched the snake, no doubt its reaction would have been very fast.

We watched as the snake slid to the ground then explored the sun-warmed stones and retaining wall beside our garden. When we looked a while later, the four-foot-long rat snake had disappeared.

What close encounter have you had?