The Moment of Lift

One day, spring semester 1981 in my American Humanities class at Ursuline Academy of Dallas, we viewed a slide of Mary Cassatt’s Mother and Child. As a young and somewhat pretentious teacher, I pronounced Cassatt’s last name in French—apologies to my students. Also, as a brand-new mother, I no doubt dwelled overly much on Cassatt’s intimate rendering of family life—unusual at the time. We had not studied any women artists to date, but here finally in the late 19th century was an example of a confident and educated woman, using her gifts to draw us into her work and open our hearts.

In class a month later, we viewed the 1936 photograph “Migrant Mother,” by Dorothea Lange. Another woman artist, using her gifts, Lange documented not the private life of the upper class but the plight of the poor. The image broke our hearts that day: a desperate mother with children she could not feed. 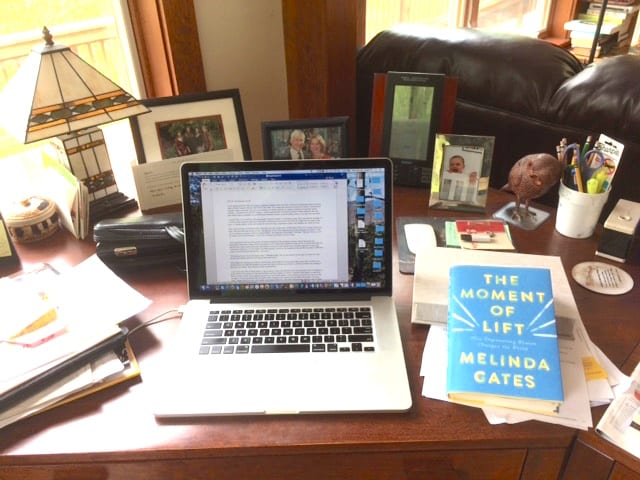 One of the members of the Humanities class that year was sixteen-year-old Melinda French. Now, nearly forty years later, Melinda French Gates has written a book: The Moment of Lift: How Empowering Women Changes the World. She asks, “How can we summon a moment of lift for human beings—and especially for women?”

How can we open our hearts, let them break, then do something about it?

During her years at Microsoft, Melinda supported women and technology initiatives as a single woman then with her husband Bill. We at Ursuline and many other schools benefitted greatly. Upon the birth of her first child, Melinda left her position at Microsoft to embark on the sometimes-bumpy road of parenting and partnership, experiences many wives and husbands can identify with. In her book, Melinda focuses on moments that lifted her and Bill closer in their relationship and work.

The foundation they founded in 2000 had a goal to benefit schools nationwide—and more. “We believed that all lives had equal value,” Melinda writes, “but we saw that the world didn’t act that way, that poverty and disease afflicted some places more than others.”

Thus, began the foundation’s initiatives in world health with Melinda working behind the scenes. She traveled to Africa and listened to women talk about walking long distances and waiting to get their children vaccinated. They wanted the best for their children, though many struggled to feed the ones they had. The women asked for contraceptives.

A few years ago, after shifting from teaching to writing, I had occasion to chat with Melinda about the expansion of the Foundation’s goals and her own company, Pivotal Ventures. She’d decided to lend her support to women’s businesses, education and health, including all forms of birth control, thus breaking the norm as a practicing Catholic. Family planning was the issue that brought a very private person into the public arena. Thanks to her friends, such as former Humanities classmate Mary Lehman and Recovery Café founder and author Killian Noe, plus indispensable mentors, such as Hans Rosling, Melinda publicly advocated for the poorest in the world.

In her book, she doesn’t shirk from stories about genital cutting or sex workers in India and the spread of HIV. She takes us with her as she sits among women, like the Migrant Mother, and listens to their stories. She opens her heart and lets it break, again and again and again, then supports the women’s norm-breaking solutions.

“…when you lift up women, you lift up humanity,” Melinda states at the beginning of The Moment of Lift. Throughout the book, she makes the case for women’s equality. Then she ends with a confession: for her, equality is a milestone, not the summit. “The supreme goal for humanity is not equality but connection.” She challenges us to take advantage of moments of lift at home, in our communities and work places, to see ourselves in others, to see ourselves as others.