The flat screen in front of the sanctuary at church displayed the words, Blessed is the one who trusts in the LORD, whose confidence is in Him. Jeremiah 17:7

The next PowerPoint slide showed a stylized image of a tree with cross-sectioned deep roots. Those planted in living water bear fruit, Pastor Tim Bohlmann said. Those that are not fall and die. He spoke of the three uprooted trees in his back yard, trees that toppled, root ball and all, in last fall’s ice storm.

As usual, I took notes, but this time with a difference. Yesterday, my husband Keith was elder for both services, so I would hear the message twice. Pastor always speaks from guidelines rather than a written script. He is an engaging speaker and well-practiced. Thus, I listened for nuances, revisions that happen when someone internalizes feedback from an initial delivery and delivers the message to a different audience, receiving another set of feedback.

After the service, I collected my thoughts. I was reminded of my recent participation in an oral history project. Although I’d made notes based on questions provided in advance, it had been several years since I taught a classroom lesson. I was out of practice. At the end of the recording session, I realized I’d left out a story, so I tacked it on at the end.

When I read the transcript, I was tempted to make more than just corrections—spelling of names, etc. I wanted to weave the tacked-on story into a better structure and revise my spoken words into polished text. But the introduction to the transcript stated: “The reader is asked to bear in mind that s/he is reading a verbatim transcript of the spoken word, rather than written prose.” I reluctantly left my all-too-human quirks alone. 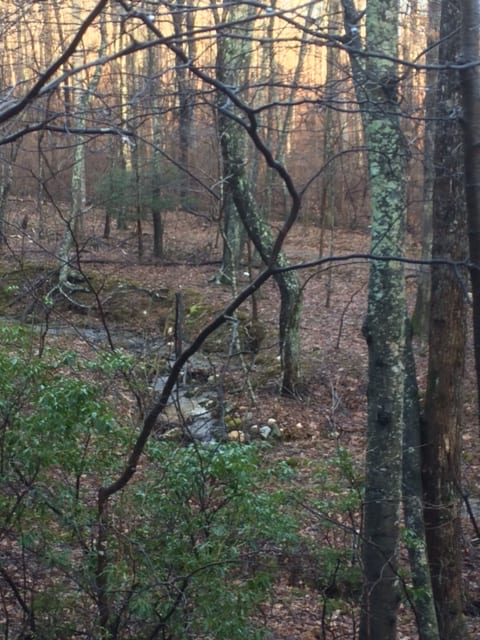 Between services at church, I also recalled an encounter I’d had last week while walking to the mailbox with Heathcliff late one afternoon. Rounding a bend on the mountain road, I saw a middle-aged man sitting and gazing intently at this scene. Heathcliff’s hackles went up. Since I recognized the man as a neighbor’s son, I spoke words of assurance to Heathcliff, loud enough for the man to hear our approach.

“I spent the day chasing cows in muddy fields,” he said, “and I was tired so I decided to take a walk.” I noticed his slouched shoulders and dirt-stained clothes.

“There’s nothing like the sound of a running stream,” I said.

He nodded. “Isn’t that the truth?”

A little further down the road, I realized I could have rooted my words more deeply. I wanted to revise my spoken words to say, “There’s nothing like the sound of living water to restore one’s soul.” Maybe next time, I said to myself, with practice.

Yesterday’s second service began with a baptism: a fourteen-year-old boy made his profession of faith and received the living waters. Then Pastor delivered the message. I noted nuances—his and mine.

The service ended with communion. Each service a narrative arc. Rooted and Practiced.