Thunderstorms brought rain and fog to the mountain last week. Despite the gloom, our mountain laurels blossomed in what little sunshine we had. New growth thrived in the shade.

Because of the weather, I sat at my desk more than usual, slouched like a hog going to war, as my mother used to say. By week’s end, pain shot down my leg and numbed my foot. Sciatica.

So. There I was yesterday afternoon, enjoying a production of Sense and Sensibility at the Blackfriar’s Theater, wiggling in my seat and longing to stretch.

Sense and Sensibility. The 200-year-old novel by Jane Austen, the 20-year-old movie screenplay by Emma Thompson, the current play adapted by Emma Whipday for the American Shakespeare Center’s 2017-18 season.

The play was the familiar story of two marriageable, recently impoverished sisters, the elder a woman of thoughtful sense, the younger a girl of emotional sensibility. Three suitors, one for the elder and two for the younger, were caught in their own battles between head and heart. All were tested in morality, ambition, and love. All made their choices.

The younger sister characterized the story’s arc: in the end, she curbed her sensibility and chose the sensible suitor—a stretch for her. And yet, when the elder sister threw herself into the arms of her beloved, yielding to her sensibility, the audience roared with happiness. Through the fog and rain of uncertainty, she too had stretched.

Instead of taking an anti-inflammatory this morning, a short-term remedy of last resort for me, I struck a balance between sense and sensibility, head and heart. I doubled down on physical stretching, an elder’s sensible remedy, so I could sit at my desk and emotionally stretch on the page. At the same time, I did my best to think while maintaining respectable posture, to curb my younger self’s hog-going-to-war sensibility. 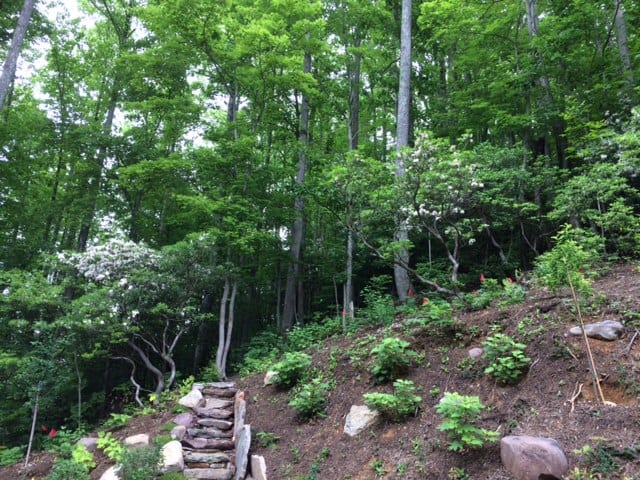 During a break this morning, I took a picture of mountain laurels, blooming in our back yard. Their sunny blossoms reminded me of the younger sister’s effusive sensibility, the less-showy, shaded new growth like the elder sister’s sensible reserve.

A good balance, I thought, always a stretch.