I pushed the front latch buttons with my thumbs, lifted the lid of the case with my middle fingers, and gazed starry-eyed at my shiny new flute.

I attached the foot to the body then slid the head joint into place. After sighting down the flute from foot to head, making sure the body section’s keys aligned with the center of the embouchure hole, I lifted the flute to my lips. Starting at middle C (low C for the flute), I played up the three-octave chromatic scale.

A deep resonance filled the music shop followed by the bright second octave and brilliant third.

“I’ve never heard it played before,” Joe said when I broke off.

“This is a beautiful instrument, so forgiving. It makes me sound better than I am.” The flute also revealed flaws I could no longer blame on my old flute’s mechanical problems.

I packed up the new flute and handed him my old flute, which needed a proper overhaul.

“I’ll give you a call when it’s back from the shop,” he said.

“Thank you, Joe. It’s wonderful to have two now, so I’m not without a flute. I practice every day.” 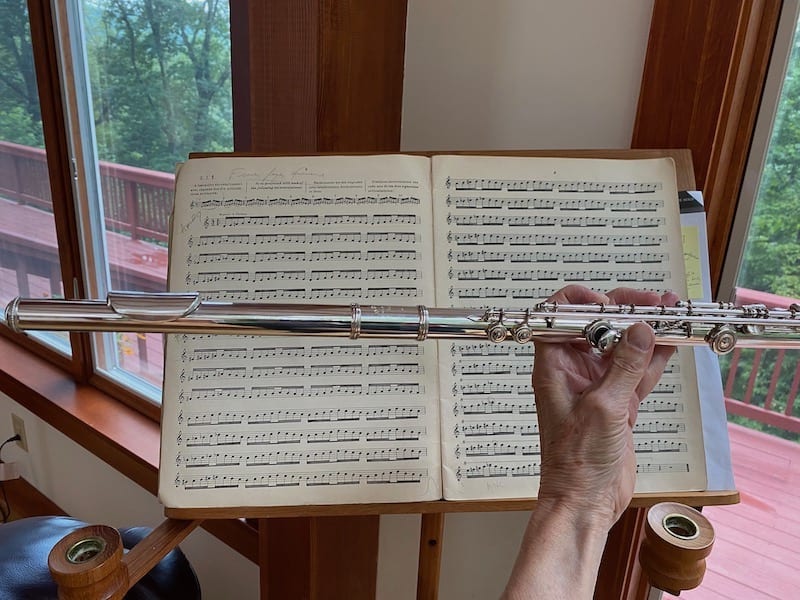 My daily practice sessions begin with several minutes of five finger exercises, a series of four iterations of five notes up and down, from bottom to top of the flute’s three-octave range. This exercise helps me identify individual pitches and series of notes that come easily—or need work. After I complete the exercise, I select two etudes that address weaknesses followed by a piece from the classical canon that is, as yet, a little beyond my reach. Before my fingers and embouchure give out, I play a performance piece, one well within my reach, thus ending my practice session on a “high note,” if you’ll excuse the pun.

I love to play performance pieces and confess to indulging myself some days, practicing only that music. But if I want to improve, I start with the five finger exercises.

For me, The Business of Being a Writer (à la Jane Friedman) is like a writer’s five-finger exercise: it warms me up for the day and identifies my strengths and weaknesses as a writer-entrepreneur.

Writing short pieces, like blog posts, is a strength, and I’ve made considerable progress with longer personal essays and my book-length manuscript—the three octaves of my writing. But my online presence could use some work: reaching out and networking with “birds of a feather” and attracting readers, what’s called building a platform.

My biggest challenge right now is pitching my work to potential agents and publishers. A pitch is a different way of thinking about one’s writing, that is, as an entrepreneur. I have to identify who my audience is (first octave resonance) then take on the persona of that reader and ask: What is the author offering me? (second octave brightness) Is it enough for me to read the blog post, essay, or buy her book? (third octave brilliance)

A solid pitch performance is, as yet, a little beyond my reach. And so, I begin my days with five-finger exercises to grow myself as flute-playing writer-entrepreneur. I identify what needs work, address my weaknesses, challenge myself, and end on a high note.

Because in the end, I play and write for the glory of God.