Thursday evening, Keith and I walked into the Ivy Inn Restaurant, located in an old house in Charlottesville. Face masks in place, we greeted the hostess who checked our reservation and showed us to an outside table on the large covered patio. It was the first time we’d been out to eat since we celebrated my mother’s life at a memorial luncheon four months ago. Tonight, Keith and I were celebrating our fourteenth wedding anniversary.

After the waitress brought us our drinks, Keith and I—sans face masks—touched glasses to toast the occasion.

“Thank you for these fourteen years,” Keith said.

“You’re welcome, my love, and thank you! It’s been quite a wild ride, hasn’t it?” 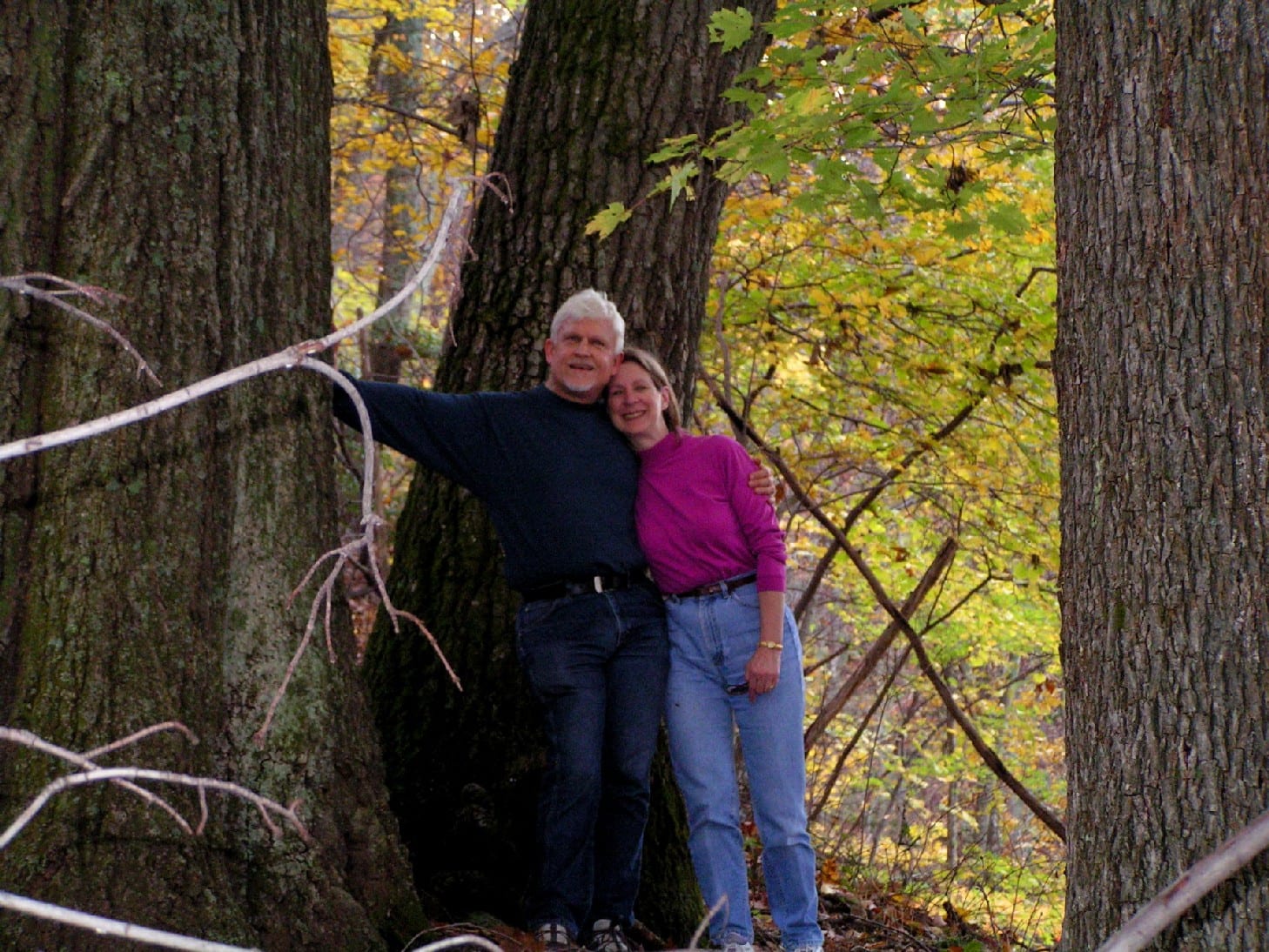 I thought about the night we first met seventeen years ago—dinner at a restaurant overlooking Baltimore’s Inner Harbor, a few minutes’ drive from where I lived—and our three-year, long-distance courtship. Keith lived in Alexandria, Virginia. I remembered trips to the Blue Ridge Mountains where we now live. My daughter took this picture of us on the mountain land in 2004. Yes, we had aged, in many ways for the better.

“Who could have imagined all the changes during those years?” I said.

“That’s for sure.” I nodded and smiled, as we perused the menu and discussed our selections.

The waitress approached. “Are you ready to order, or would you like to linger a bit longer?”

“We’re ready,” Keith said. “We’ll share the warm medley of wild mushrooms as an appetizer but would each like a mixed greens salad—that’s two salads. For entrée, my wife would like the Maryland Jumbo Lump Crab Cake, and I’d like the tenderloin.”

“Rarish.” We’d been married so long, I could have answered for Keith.

“Would you like to keep the drink and food menus?”

“No,” I said. “We’re thinking about one of the desserts but will decide after dinner.” We’d been married so long, Keith could have said that instead of me.

During the meal, we talked about our writing projects, world news, and history. We never lacked for conversation. I recalled what Keith had written to me about himself before we met in person:

“I think I am a tough match for any woman, not what every woman wants. Probably too intense and not at all laid back, but several women have told me I was the most interesting man they knew. I’m sure I would not bore you; maybe exasperate you.”

Ah, a challenge, I thought at the time, how delicious! If I step up to this, I’ll learn new things and grow.

As the waitress cleared our plates, I looked at Keith and raised my eyebrows. He nodded.

One dessert, two spoons, the same as the first night we met.

One marriage, two people. For better, for worse, for richer, for poorer, in sickness and in health, to love and to cherish, till death us do part.

Some things do not change.