By mid-day on Saturday, clouds had darkened to the southeast, and soon we heard rumbles. Heathcliff and Freya retreated to the basement’s safety. Lightning and thunder drew closer. A flash followed immediately by a crash, and the power went out.

Our whole-house backup generator cranked then roared. After the storm cleared, I texted our nearest neighbor. “Do you have power?”

“Yes, but whatever it hit knocked out four circuit breakers, and I just tried to turn on my TV, and the satellite, TV and DVD player are blown.” Fried.

I filed an outage report with the Central Virginia Electric Cooperative. A crew appeared after yet another storm billowed up and rained down on us, this time from the north. The “green box” on our property had been hit in the first storm, they said while restoring power. I lamented our neighbor’s loss—felt a little responsible, too, as if I could have prevented harm—and said a prayer of gratitude that it wasn’t worse.

Lament and Grace. The Both-And Paradox.

“We cannot keep harm from those dearest to us,” writes Jen Pollack Michel in Surprised by Paradox: The Promise of And in an Either-Or World. “To love is to do our best and then to hope, to have faith. Often, love means simply circling and staying near—trusting that this will somehow prove enough.”

While weekend storms raged, I read Stephanie Land’s Maid: Hard Work, Low Pay, and Mother’s Will to Survive. Land’s is a sobering story about falling into poverty. By her own admission, she didn’t do life “the right way” by getting married then starting a family. She wandered into her late twenties, working at bars, partying with her friends, and wondering if she should finish her education. Then she had a child by an abusive boyfriend, who eventually threw her out of his house. Her daughter Mia learned to walk in a homeless shelter.

From that point, Land’s story is similar to Naomi’s in the book of Ruth. Having suffered the loss of family, not by death but through her parents’ divorce and dysfunction, Land looks to the greater community for help. In Land’s case, aid comes from the convoluted system of government assistance programs and employment as a maid.

While lamenting her poverty and struggles to properly care for herself and her daughter, Land comes to appreciate what she has, especially when people treat her with kindness rather than the distain. I could not help but think we all could use regular reminders of the new covenant: to love God with all our hearts and love others as ourselves.

Although Land’s story is not about faith, I saw God’s fingerprints all along her Naomi-like journey. God guided her through the hard times, protected Mia from injury during a car accident, and showed Land a better way. She finished her education and wrote her story. Lament and Grace. The Both-And Paradox. 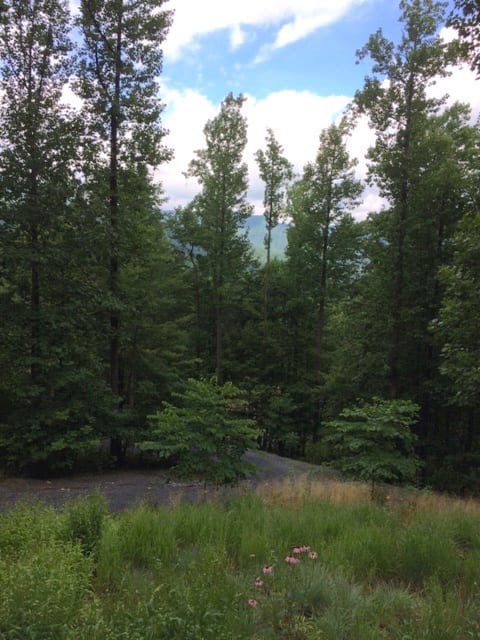 Another series of storms blew through on Saturday night, these from the west over the Blue Ridge Mountains. Our poor puppies spent the night in the basement. This morning, while raking gravel across driveway rivulets caused by recent downpours, I both lamented the damage and praised God for the beauty the rain had brought—greenery, butterflies, coneflowers. Then I looked to the horizon for the next storm, hoping for the best, trusting this will prove enough to protect us all.

Lament and Grace. The Both-And Paradox.