Heathcliff and I took our short walk today, between this morning’s rain and thunderstorms due later this afternoon. As usual, we guarded our steps down the steep, gravel driveway, turned left to traverse the flat turn-around, then picked our way down the mountain road, passing three neighbors’ properties before retracing our steps—one-mile round trip. For two-mile walks to the mailbox, we skip the turn-around and keep going at the foot of the driveway.

Downhill is easier, except for the potential to slip on gravel, which both of us have done in the past. And falls. Either short or long walks up the mountain challenge us both. We stop along the way to catch our breaths and admire the views.

During my time in Hong Kong, I read The Second Mountain: A Quest for a Moral Life, by New York Times columnist David Brooks. His thesis about life’s first and second mountains struck me as similar to Richard Rohr’s first and second halves of life described in Falling Upward.

Climbing the first mountain, Brooks states, we strive for prominence, pleasure, success, and independence; we are self-centered individuals. The valley is a season of suffering—in Brooks’ case, divorce after a long marriage. If we suffer well, we recognize our yearning to transcend ourselves and care for others then exit the valley to climb the second mountain. There we become other-centered, committed to relationships with desires of the heart and soul at the center.

Brooks writes, “When I’m describing how second-mountain people live, what I’m really describing is how these people made maximal commitments to others and how they live them out in fervent, all-in ways. These people are not keeping their options open. They are planted. People on the second mountain have made strong commitments to one or all of these four things: A vocation. A spouse and family. A philosophy or faith. A community. A commitment is making a promise to something without expecting a reward. A commitment is falling in love with something and then building a structure of behavior around it for those moments when love falters.” 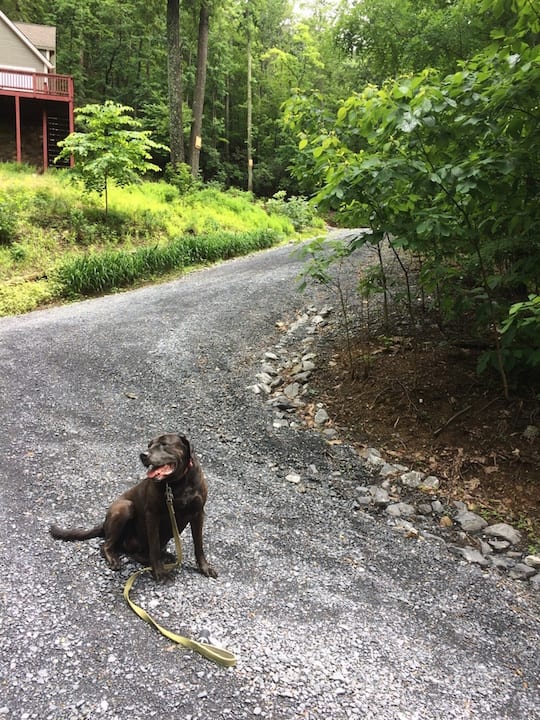 While Heathcliff and I huffed our way up the steep driveway toward home, I thought about living a second-mountain life: my vocation as a teacher now a writer, my marriage to Keith and dedication to our families, faith, and communities— neighborhood, local groups, and church. I thought about how my love often falters, like foot-slips on gravel, then thank God that His commitment does not. In truth, the steeper the climb or greater the storm, the deeper is the commitment.