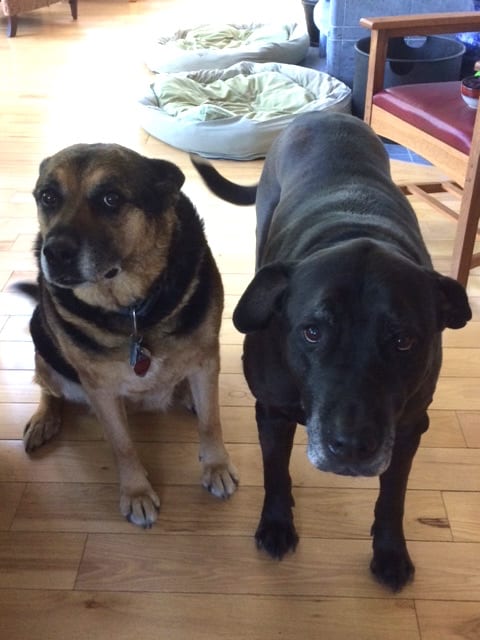 “Freya, come,” I called out the kitchen door. Though Heathcliff came and waited inside the door, she trotted in the opposite direction. Apparently, she wanted to run and bark a little longer before breakfast.

“Heathcliff, sit,” I said, holding his food bowl above his head. Though Freya obeyed, he stood and stared at me. Apparently, he wanted to consider my command as a suggestion.

Both of our dogs have stubborn streaks. Like human beings, they want to do what they want. Freya dunks herself in the stream to cool herself—reasonable self-care—and Heathcliff leans his against people, hoping for rubs—reasonable self-satisfaction.

In humans, however, stubbornness can morph into self-righteousness and pride. And that is the story of Sophocles’ Antigone now playing at the American Shakespeare Center in Staunton, Virginia.

A decision had been made for Oedipus’ sons, Eteocles and Polynices, to alternate as kings of Thebes. But when Eteocles’s year ended, he did not relinquish the throne to his brother. Polynices attacked Thebes, and the brothers killed each other in a battle. Their uncle Creon ascended the throne and ordered burial for Eteocles, technically the former king of Thebes, and none for Polynices, technically a traitor. As their sister, it was Antigone’s sworn duty to bury Polynices, too, but in so doing, she broke her uncle Creon’s narrow interpretation of the law.

Does one obey an earthly ruler or the gods? Antigone’s choice was clear. Upon arrest, she said to her uncle-king, “And if by chance I seem to you to act in foolishness, it may just be it is a fool himself condemns my foolishness.” The confrontation reminded me of Proverbs 9:7-9.

Creon stubbornly stood by his original decree and condemned Antigone to death. Even the blind prophet Tiresias warned Creon of his folly: “All men make mistakes, but a good man yields when he knows his course is wrong, and repairs the evil. The only crime is pride.”

In the end, Creon’s pride led to the death of his niece Antigone, his son Haemon, and his wife Eurydice. Only then did Creon’s stubbornness collapse. Instead of running in the opposite direction, he sat in obedience to a power higher than himself.

Then the Chorus spoke these lines:

Man’s highest blessedness in wisdom chiefly stands;
And in the things that touch upon the Gods, ‘tis best in word of deed to shun unholy pride;
Great words of boasting bring great punishments;
And so to gray-haired age comes wisdom at the last.

Freya and Heathcliff’s stubbornness is not prideful. Pride is a human crime—easy to see in others, hard to see in myself. Yet for both dogs and humans, obedience to one’s master is the highest blessedness. Wisdom at last.