Last week’s warm temperatures and gentle rain brought a burst of spring to Vanaprastha, and with it the invasion of weeds. The usual culprits at our elevation are dandelion, chickweed, ground ivy, and broadleaf plantain. At first, the weeds look attractive to people like me, starved for greenery after a long winter. But then the invaders spread, killing out plants that nourish birds, reptiles, and insects. 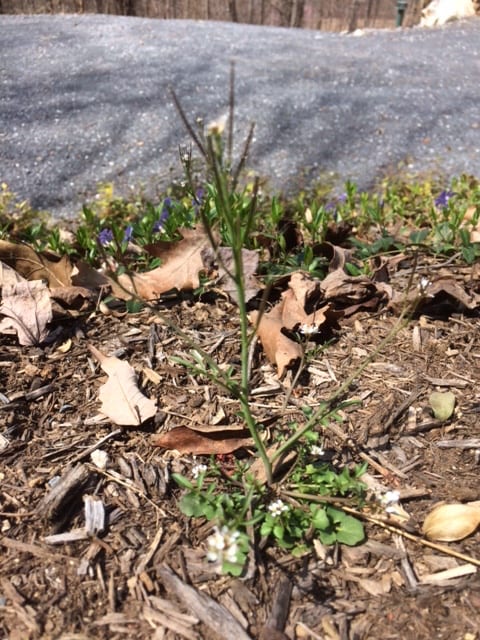 This year, I discovered a new invader, growing in the slopes and meadow around our house. Like Japanese stilt grass, it’s popping through the gravel driveway and along the mountain road, too. The women in my Bible study group said the weed appeared in the valley two years ago. Now its seeds have travelled up the mountain.

After some research, I identified the plant as bittercress, an annual spring weed in the mustard family. Small white flowers along the stems develop into seed pods, which spread via carriers: wind, human, or creature. Bittercress grows in dense mats, but the weed’s shallow root system makes it easy to pull.

I do not feel called to blog about social issues, though there are connections when writing about nature and faith. On the other hand, my husband Keith, who is active on the Wall Street Journal Blog, is often compelled to comment about the world in which we live. This past Saturday, he made the connection between society and faith explicit:

Every day, Keith and I ponder our relationship with the Divine, nature, neighbors, each other, our children and one surviving parent. It takes vigilance to align human behavior with God’s established guidelines. We often fall short.

Yet throughout the day, in our own ways, we nurture relationships, witness to faith, and rebuke those in community who trod on the principles of order. We know we will not defeat the weeds, old or new invaders in ourselves or others. That victory belongs to Jesus.