I love a backyard, country wedding

Keith and I saw balloons attached to signs, pointing to a gravel driveway. We pulled next to vehicles already parked on the side lawn. Our carpenter had purchased the house several months ago, and now he was getting married. 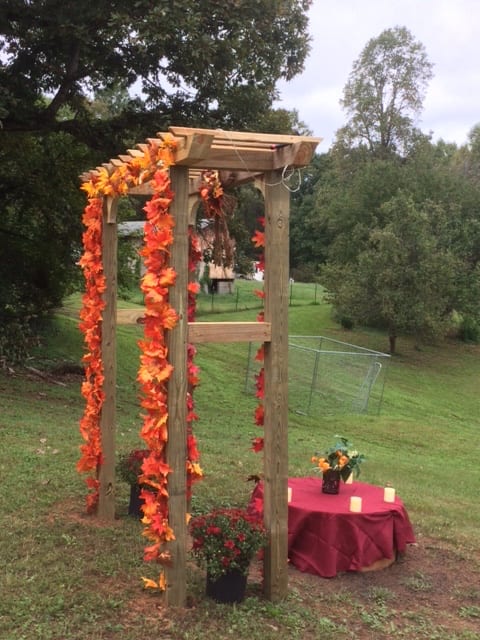 In the backyard, folding chairs and tables, covered with plastic tablecloths, were set up end-to-end in view of the altar. The groom had built the arbor, and the bride, her family, and friends decorated it with mums and autumnal-themed colors.

Children dressed in their Sunday best raced around the yard, tossing large colorful balls. Country songs hummed through the house sound system set up outside. The groom’s hound and the bride’s Chihuahua added to the din.

We met family of the bride and friends of the groom like us. The middle-aged couple had had ups and downs in life, including being previously married to others. It’s not easy, and many marriages fail. But statistically marriage still provides more family stability than any other living arrangement.

And that’s why we were there: to support the bride and groom in their decision.

She wore a borrowed dress, and all the attendants—male and female—raided their closets for matching, burgundy-colored shirts and dresses. Bouquets were plucked from centerpieces then returned after the ceremony. The local pastor officiated. Many, including the bride and groom, sported cowboy boots.

A tent had been set up in the far side yard to accommodate the buffet. After the couple exchanged rings and kisses, and we all took pictures—DIY cellphones, of course—the casserole brigade carried food from the kitchen: pasta salad, deviled eggs, potato salad, meatballs, Little Smokies, baked beans, mac and cheese, chips, and pulled pork with barbecue sauce and buns for sandwiches.

And coolers filled with iced beverages.

The groom had made the cake—the top to freeze for their first anniversary, and the bottom to share with guests. I like the taste of wedding cake, and this one was especially fine.

I love a backyard, country wedding. How about you?