In last week’s post, I wrote, “We are all in this together.” Sunday. Trying to get home, to work, to somewhere other than where we are, Grand Rapids. Then Monday.

I stood in line at the airline check-in counter for an hour, checked my bag, cleared security, and walked the long, now crowded corridor to gate B7. Throughout the day, I received text alerts: flight delays and missed connections. I waited in line again to change reservations, adding to my collection of useless boarding passes.

I recognized the gate agent, rebooking flights. The Grand Rapids shuttle driver who’d taken me to airport and back to the hotel on Sunday had also driven me to the airport on Monday—he’d worked through the night. Had airline personnel stayed on the job for two days straight, too?

Monday evening 6 pm, I boarded a plane to Chicago. The plane pulled away from the gate to get de-iced. I and many others would not make our connections.

“People flying to major cities should be able to get a flight out tonight,” the flight attendant said, “but those flying to local or international destinations will have to wait until tomorrow.”

And I was all of them—fussy, tired, short tempered.

A young woman, in line to rebook flights, shrieked at the airline agents. “This is ridiculous. What do you mean no one has time to find my luggage? I’m going to stand right here until you send someone to get my bags on the right flight.”

I looked at the middle-aged woman next to me, and she rolled her eyes. “Yeah, I know,” I said then grinned, “but the fact is I’ve been there, done that, and I’m perfectly capable of doing it again. Hopefully not now.” She burst out laughing, and so did I.

The ticket agent booked me on a different airline’s flight to Dulles – three hours’ drive from home. I called Keith and explained the change of plans. “If I don’t take this flight, I’ll probably have to spend the night in the airport.” My voice caught.

“Send me your flight information. I’ll leave as soon as I get it.”

We got home at 4 am on Tuesday morning. I picked up my bag at the Charlottesville airport early Wednesday morning. Thursday morning, Keith and I woke to this rainbow. 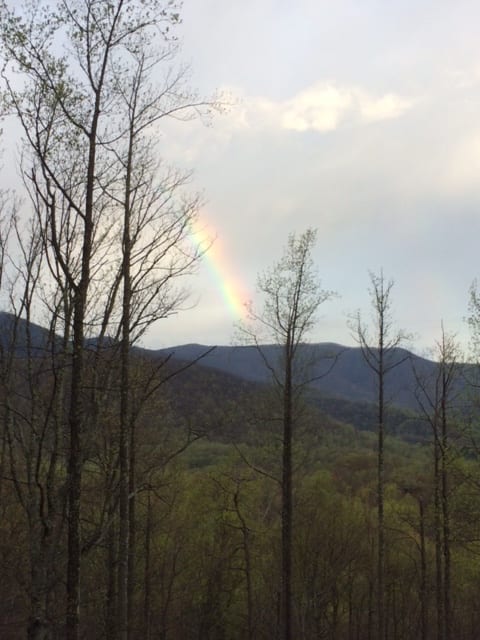 I have set my rainbow in the clouds, and it will be the sign of the covenant between me and the earth. Genesis 9:13