What is it really?

A week ago, I assembled the following pickling spices: mustard seeds, whole allspice, coriander seeds, whole cloves, ground ginger, crushed red pepper flakes, bay leaves, whole cardamon pods, whole black peppercorns. I added a few tablespoons of the pickling spices to a pot of water with Kosher salt, pink curing salt, brown sugar, and a half stick cinnamon. After boiling and cooling the brine, I placed a large brisket in the pot and refrigerated for five days.

What is corned beef really? In childhood, I would have looked for answers in my family’s World Book Encyclopedia, what could be a long, time-consuming, and not always satisfying process. These days, thanks to the Internet and a less-busy schedule, I can ask such questions, do the research, and make it myself. DIY in much less time.

Corned beef is salt-cured beef, originally treated with rock salt or “corns” of salt. It gets the pink color from nitrates or nitrites, which preserve the meat. Using salt alone turns beef a less appealing though perhaps healthier gray color.

Curing beef has a long history among various cultures around the world. The practice grew more common in industrialized countries when the population shifted from rural to urban. Because Ireland produced a great deal of beef for export, corned beef became associated with the Irish.

This was ironic because the people were poor and ate little meat since most farms were owned by wealthy, absentee landlords. During the two world wars in the twentieth century, corned beef increased in popularity due to rationing of fresh meat. Irish immigrants in the United States, accustomed to eating bacon if any meat at all, still considered corned beef a luxury, though it was cheap and readily available.

So what is it really? Connected to St. Patrick’s Day, corned beef is purely American.

On Saturday morning, I loaded our large crock pot with carrots and potatoes (traditional Irish root crops), onions, water, rinsed brisket, fresh pickling spices, and a small amount of beer. I added cabbage, another traditional Irish vegetable, toward the end of the cooking time in the late afternoon.

Dinner. First a prayer of thanksgiving then corned beef and cabbage with sourdough bread. What a St. Patrick’s Day meal is really for my half-Irish husband and me. 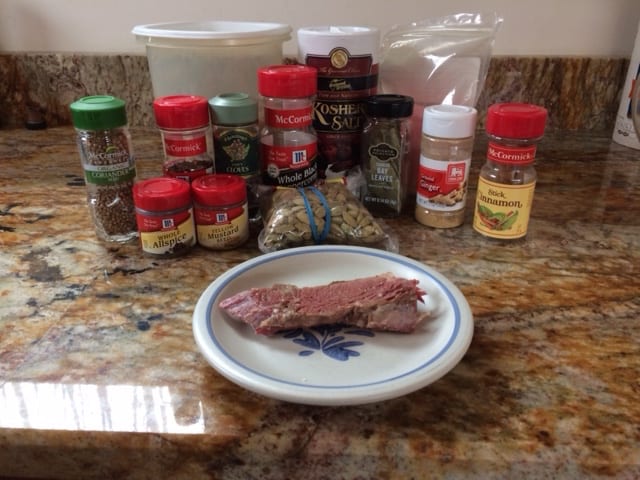 (Ingredients and a slice of the final product pictured.)

What “what is it really” question do you have?