Thank you for sending us “The Piano.”

We appreciated the chance to review it; however, we’ve decided it’s not right for [our magazine] at this time. This doesn’t mean it’s not a fit for another magazine.

We wish you the best of luck placing this story. Write on.

Five rejections in the past five months. One essay “declined” per month. That’s a good goal because, as the saying goes, you can’t win the lottery unless you buy a ticket. Or you can’t get published unless you submit pieces. Every time my writing gets rejected, I look it over and sent it elsewhere or revise then submit.

Being a member of a Facebook group of writers who post about rejection, I know I’m in good company. The other day, one writer posted: “Rejection is God’s Protection.” She felt she’d dodged a bullet by not getting a job that would have consumed her life.

Sometimes I feel like I’ve dodged a bullet by not getting a piece accepted – when I see it isn’t ready. In other words, the essay doesn’t quite know what it wants to say. Ready or not, acceptance opens the author to comments, which in our social media-driven world can be brutal.

Brian Doyle, who I wrote about here, published an essay collection Eight Whopping Lies in 2017, the year of his death. The last essay in the collection, “A Prayer for You and Yours,” captures both the agony of rejection and the fear of acceptance.

Thirty years ago, Doyle a devout Catholic and his wife were told they would never have children. They prayed for a long time, never expecting their prayers would be answered.

God granted them a girl and twin boys. Three children. Then Doyle’s prayers doubled. He asked God to protect his children from illness, death, accidents, and heartaches.

“In the end, I remember vividly, I boiled all my prayers as a parent down to this one: Take me instead of them. Load me up instead of them. Let me eat the pains they were served for their tables. I don’t think I ever fully understood the deep almost inexplicable love of the Christ for us, why he would accept his own early tortured death as a sacrifice, until I had been a father for a while.”

Every day Doyle thanked God for his children, for not protecting him from this inexplicable love. 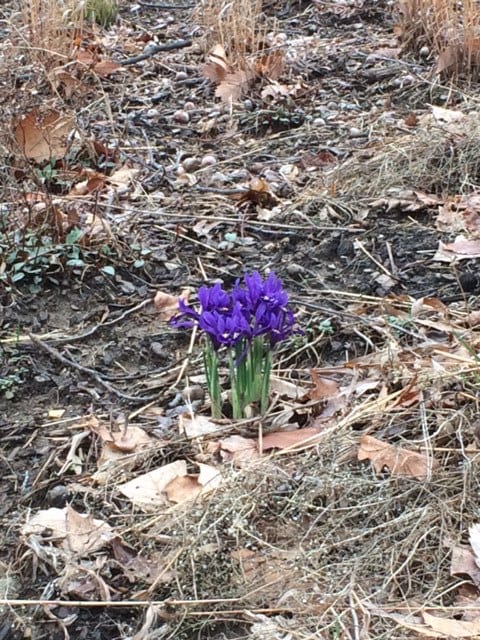 Yesterday morning, Keith pointed out several clumps of what look like dwarf crested irises in the meadow. According to our master landscape plan, iris cristata are not supposed to be in the meadow. But there they are. 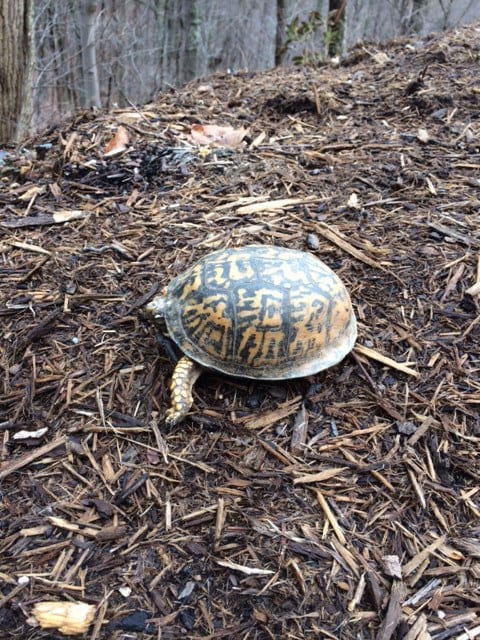 On the way home from church, we spotted a turtle crossing the mountain road. A female eastern box turtle. Mating season has begun, and turtles are on the move. Keith picked her up and moved the turtle to a safer place on our property. Maybe not where she’s supposed to be, but there she is.

Last fall, I submitted an essay called, “The Turtles.” It’s a faith piece and still under consideration. Will rejection be God’s protection this time? Or will the essay get accepted – there it is – and suffer slings like this from one of Doyle’s readers:

“I find your ostensibly ‘spiritual’ essays to be nothing more than religious claptrap deviously designed to sell the scurrilous agenda of the Papist Church. Your nominally ‘spiritual’ essays should bear a large warning sticker on the cover warning sensible and reasonable readers to stay away.” (from Doyle’s “Selections from Letters and Comments on My Writing” in Eight Whopping Lies)

What do you think? Is rejection God’s protection?