And straight I am nothing

Last Friday night, Keith and I attended a performance of the American Shakespeare Center’s Richard II at the Blackfriars Playhouse in Staunton, with actress Sarah Fallon playing the title role. I expected a female playing a male character would intrigue. But the words spoken by a deposed ruler erased all gender distinction.

“I am nothing,” Richard II said. Rich or poor, nothing contented. No human shall be pleased, the divine right king said, until “eased with being nothing.”

Richard II didn’t have much time to muse further. He died by assassination before the scene ended.

When Elizabeth Meade Howard’s father died at the age of 90 in 2000, she grieved. She also wondered how people live long and well like her father, given that his death had moved her a generation closer to her own. Howard went looking for mentors like Sara Lawrence-Lightfoot had in The Third Chapter, profiling post-retirement people in their fifites and sixties. But Howard’s subjects were in their fourth and final chapter.

During the decade or so following her father’s death, Howard interviewed several famous people who had lived well into their seventies, eighties, nineties or beyond the century mark. Howard identified three common factors to explain why her mentors thrived with age despite adversity.

All had turned loss into healing. When broadcast journalist Walter Cronkite’s wife Betsy died, he said, “I lost my North Star. For 65 years, she was hardly out of sight. I miss her every minute.” Though he mourned, Cronkite found dating companionship with a widow and remained active in his profession.

All of Howard’s subjects had a passionate purpose. When asked at a recent reading, Howard said that photographer Gordon Parks was one of her favorite subjects in this regard. Parks knew how and when to grab an opportunity. “I didn’t let my blackness bother me,” he said. “If you’re going to live among human beings, which we’re placed here to do by God on this planet, you give youreslf to people who you want respect from. You don’t spend your time hating people becaue they’re not worth it. You rid yourself of them and go do what you have to do.”

All of the interviewees pursued life with courage. “They didn’t age passively,” Howard wrote. “They learned how to do more with less.” They stayed active with work, community service, family, and/or faith.

“We need to be aware of the fact that God is ready to help,” said Ruth Stafford Peale, editor and wife of minister and motivational speaker Dr. Norman Vincent Peale. “We need to keep that uppermost in our minds. He will help personally in problems of everyday life. He very much wants you to ask. He will answer, ‘yes, no or wait awhile.’” 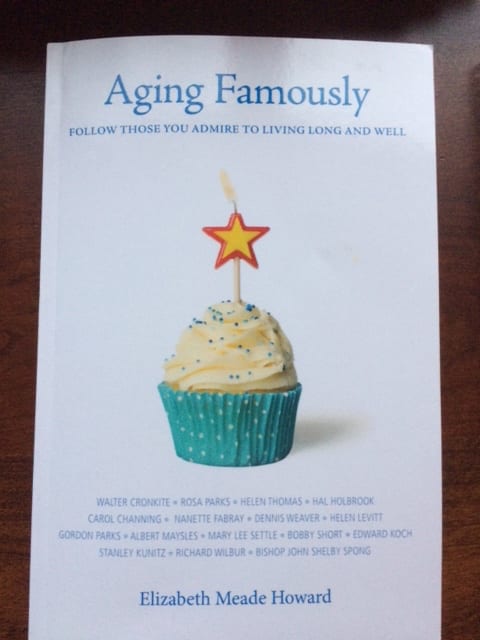 Seven of Howard’s mentors lived long enough to read her book Aging Famously, published last year. The other twenty-five of thirty-two interviewees had died: Walter Cronkite in 2009 and Gordon Parks in 2006, both at the age of 93, and Ruth Stafford Peale in 2008. She was 104.

Yet all seemed content, eased by doing something purposeful with their lives every possible day. I couldn’t imagine any one of Howard’s mentors saying, “And straight I am nothing,” like Richard II.

Except for those of faith who might humbly add, “Apart from God, I can do nothing.” (John 15:5)