This is the third of four posts related to our August excursion to see the solar eclipse.

Sunday before the eclipse, Keith and I spent the night in the “Out of Africa Experience” room at Thee Matriarch Bed and Breakfast in Orangeburg, South Carolina. We shared a bathroom across the hall with Keith’s brother Kim and wife Margaret who stayed in “The Florence of Italy Quarters.” Both rooms in this high-ceiled house were beautifully decorated, exotic yet divinely comfortable.

In the middle of the night, I slipped out of bed and tiptoed across the hall to use the bathroom, leaving our room door unlatched so I didn’t lock myself out. I opened the bathroom door and saw a teenage boy, my son David at that age and at the same time not David, slumped against a wall near the sink. The room gleamed unnaturally white.

I wondered to myself, something isn’t right about this nocturnal wandering. You know that feeling you get—when you slowly realize you might be dreaming?

The boy seemed in distress. When I touched his arm, he rolled his head toward me and said, “I’m blind.” His voice sounded like Haley Joel Osment’s whispered, “I see dead people,” in the movie The Sixth Sense.

In my dream, I somehow called 911. Two uniformed paramedics magically appeared and said, “No problem, Ma’am, we just need to change his chip.” They pushed what looked like a freckle on his neck, popped a memory card out, and inserted a new one. “He’s good as new,” the paramedics assured me.

They vacated the bathroom, and I did what I came to do then went back to bed. 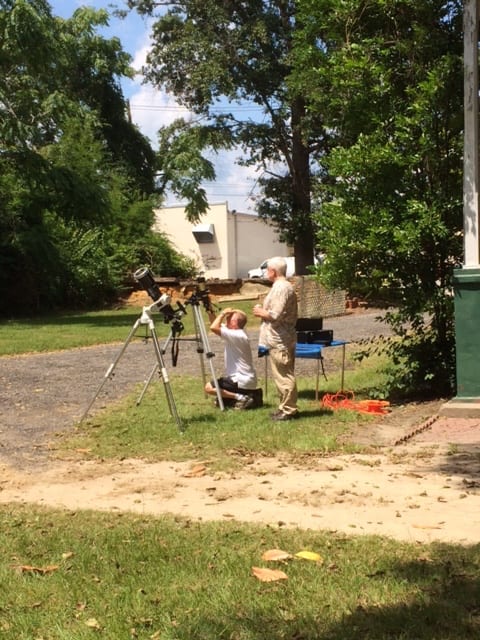 The next morning, while Keith and his brother hovered around the telescopes, I puzzled about the strange dream. Hmmm…Haley Joel Osment starred as a robot named David in Steven Spielberg’s 2001 movie A.I. Artificial Intelligence. Pinocchio – my husband’s blog post.

Somehow my brain had pulled together the Inn’s setting, our science expedition, Haley Joel Osment movies, and my husband’s post.

I sleep with a science fiction and fantasy writer. Now I share his dreams.