Raise your hands a little higher 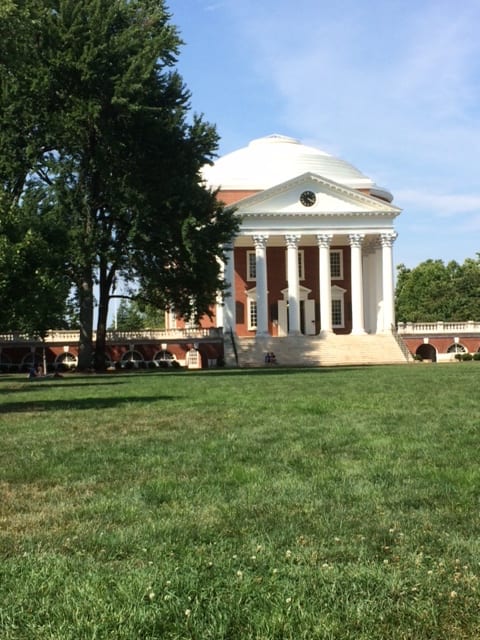 The air conditioning in the Rotunda’s Multipurpose Room at the University of Virginia was set to sub-zero. New arrivals, refugees from last week’s steam bath in Charlottesville, might have welcomed the chill. But those of us who’d stayed from the previous workshop in that location huddled in sweaters, jackets, and wraps. No matter. The room was packed, and no one complained because renowned writer and teacher Bret Anthony Johnston was giving a craft talk at the Virginia Quarterly Review Conference.

My fingers hovered over the keys of my laptop, ready to record “the list,” items about writing that usually-but-not-always work for him. Johnston began his talk with a quote from Teller of the entertaining duo Penn and Teller—he’s the one who never speaks on stage. “Sometimes, magic is just someone spending more time on something than most people would reasonably expect.”

I’ve never had difficulty with what writers call “butt-in-chair.” In fact, my problem is the opposite. Sometimes I get so caught up in what I’m writing, reading, or learning, I forget to move. Hours later, I’ll look up and notice the time. Awk! My body creaks and groans as I wobble to the bathroom.

Dedication doesn’t necessarily mean quality, but it helps keep us going. Writers get lost or confused; stories go off track. “To write is to practice utter humility,” Johnston said. I nodded my head. Every single one of my blog posts starts as something over the weekend and ends as something else on Monday morning. Sleeping on it always improves my writing, though some posts hit their mark and others don’t.

Johnston also quoted John Wayne’s character John Bernard Books from the movie The Shootist. A young gunslinger was practicing, trying to get faster on the draw. Books said to him, “It isn’t always being fast or even accurate that counts. It’s being willing.” Willing not to blink an eye or draw a breath or stay your hand. Willing to give things up, to be single minded, to surrender to the work.

The hour-long session ended with what Johnston called a hippy Navy Seal exercise. “Raise your hands as high as you can,” he said. We all complied. One young woman even stood up and raised her hands. “This is your writing life,” Johnston said. “Now raise them a little higher.”

Muscles from torso to fingertips reached for the ceiling, higher. We were more capable than we’d thought. And the room no longer felt cold.

What makes you reach higher?