Rain fell softly over the Rockfish Valley that morning in May, and fog hovered over the Blue Ridge Mountains. The weather forecast called for a break in the rain from mid-morning to early afternoon, enough time for our guests and us to visit The Frontier Culture Museum in Virginia’s Shenandoah Valley town of Staunton. 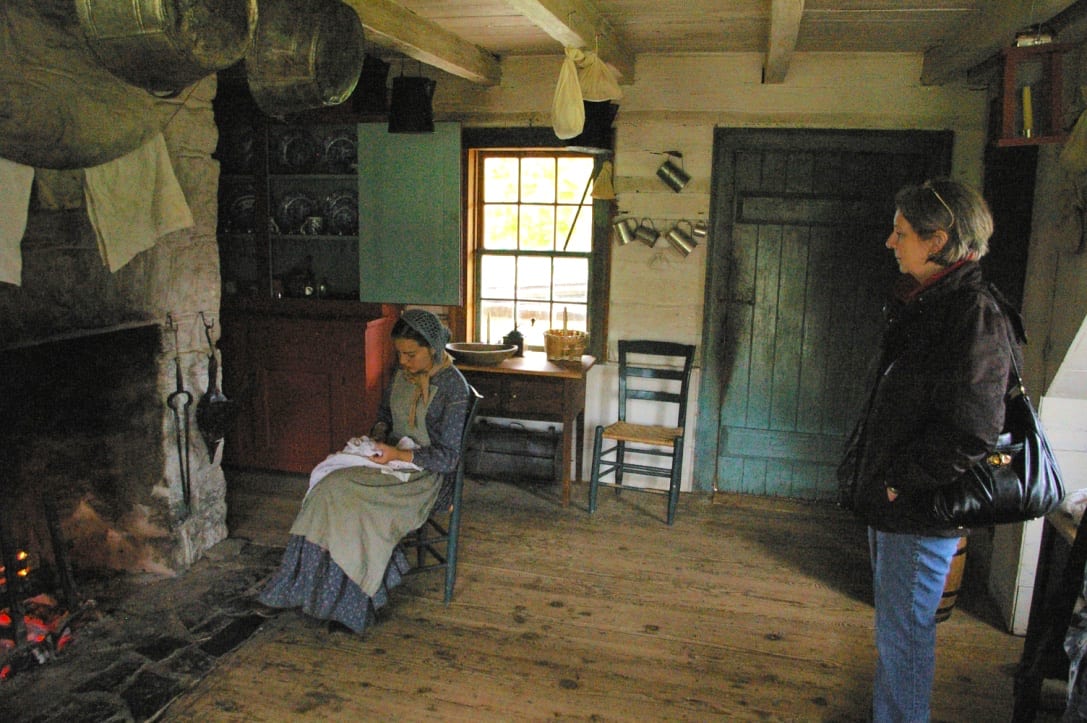 “The people who settled on the western edge of England’s North American colonies during the eighteenth century created a distinctive folk culture,” the brochure stated. We toured African, American Indian, English, Irish, German, and American exhibits and interacted with in-period interpreters. In this picture, I’m conversing with the interpreter in the 1850’s American Farmhouse. As we roamed from site to site, it wasn’t hard to see hardship, self-sufficiency, and interdependence—farmers, skilled craftsmen, such as the Irish blacksmiths, and those involved in commerce, education, and ministry.

Last week during our visit, my 94-year old mother talked about growing up during the Depression in Northern Maine – a frontier of sorts. Those who lived on farms, like my mother, had shelter, although it might not have been grand. “The first farmhouse was small, one or two rooms with a loft,” she said. “When the sons grew to adults, they built a larger house on the farm for their parents.” My mother’s father took over the family farm, and that’s where my mother grew up. “The small farmhouse was our granary,” Mother explained, “and we lived in the house my father and his brothers built.”

We saw a similar pattern at the Frontier Museum: the 1740’s farm was essentially one room; the 1820’s farm was two, one-room houses connected by an east-west hall designed to catch the breeze. The 1850’s farmhouse had a granary and connected side-by-side mirror houses, expanding as the family grew in numbers—more mouths to feed.

“My mother canned; my Dad smoked meat; and, of course, we always had potatoes,” Mother said about the 1930s Depression in northern Maine. “There wasn’t much variety, but if you lived on a farm, you ate. Some people didn’t own farms; they worked in town. Many were out of work then. Nobody had any money.” My grandmother sent my ten-year-old mother with food to give to neighbors who would have otherwise starved.

Tomorrow is the 4th of July, Independence Day in the United States. Among the 56 signers of the Declaration were farmers, lawyers, merchants, ministers, physicians, soldiers, scientists, surveyors, musicians, and a printer (Ben Franklin). Many had more than one profession, among them Charlottesville’s Thomas Jefferson, the author of the Declaration. He wrote: “We hold these truths to be self-evident, that all men are created equal, that they are endowed by their Creator with certain unalienable Rights, that among these are Life, Liberty and the pursuit of Happiness.”

God created us uniquely, not equal to one another except in our ordinariness as human beings. And though Jefferson’s words inspire us to pursue liberty and happiness, the truth is that life on this earth is filled with hardship. Self-sufficiency fails us; we all depend on others. Life humbles us.

As Thomas Merton wrote in New Seeds of Contemplation, “Humility consists in being precisely the person you actually are before God, and since no two people are alike, if you have the humility to be yourself you will not be like anyone else in the whole universe.”

A new frontier: to be the unique person God created me to be, to depend on Him, to do His will.