So. I’m propped on my bed, basking in the afternoon’s warm sunshine and reading Ann Voskamp’s The Broken Way: A Daring Path into the Abundant Life. She asks: How does one live an abundant life amid tragic accidents, illness, and death?

Voskamp had chronicled her journey to gratitude in One Thousand Gifts published in 2011. In The Broken Way, she takes her readers into GIFT – Give It Forward Today. But, she admits, doing loving acts is easier than the messy business of being loved. “Letting yourself be loved is an act of terrifying vulnerability and surrender,” Voskamp writes.

The author Voskamp focuses the lens on herself, revealing her relationships with God, family members, and friends around the world.

Two weeks ago, I was reclining in my chair, reading Writing the Sacred Journey: The Art and Practice of Spiritual Memoir. Author Elizabeth Andrew dedicated a chapter to spiritual mentors, honoring our teachers. As an example, she recalled Tom Junod’s portrait of Fred Rogers of the children’s TV program Mister Rogers’ Neighborhood. During weeks of shadowing, Junod showed Rogers “growing tired, defying his staff, stooping down to listen to children, signing photographs with the Greek word for grace, and peeing at the edge of a cemetery.” (I could hear my children saying, “Not Mister Rogers!”)

Tom Junod focused the lens on Fred Rogers, revealing him as an every-day person.

At one point, Rogers asked Junod to tell a story from his childhood about the time he lost his faith in prayer. As Junod talked, Mister Rogers retrieved a small camera and asked if he could take Junod’s picture. “I like to take pictures of all my new friends, so that I can show them to Joanne…” his wife.

The author could not keep the lens pointed at Fred Rogers because Rogers kept pointing it back at him. 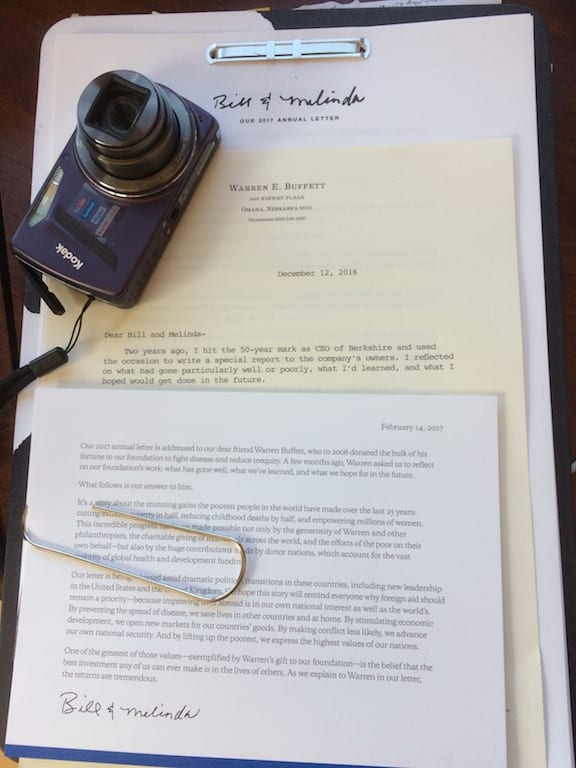 At my desk last week, I read the Gates Foundation 2017 Annual Letter, a big thank-you note to Warren Buffet, marking the tenth anniversary of his huge gift to the foundation. The letter included data and charts showing remarkable progress among the poorest people of the world. Preventing the spread of disease – malaria, tuberculosis, HIV, polio – and stimulating economic development make conflict less likely, the letter stated.

“Optimism is a huge asset,” said Melinda Gates. “We can always use more of it… It’s especially valuable to stay optimistic when you face disappointments, and we’ve had more than a few.” There’s no HIV vaccine yet, no microbicide to block infection, no stronger malaria vaccine.

And yet the past few years have witnessed dramatic increases in literacy and the status of women and minorities, along with decreases in infant mortality, global poverty and violence, the latter referring to Steven Pinker’s The Better Angels of Our Nature. “That’s starling news to people,” Bill Gates said, “because they tend to think things are not improving as much as they are. Actually, in significant ways, the world is a better place to live than it’s ever been.”

The Gates focus the lens on the world, revealing their optimism for mankind.

On what do you focus the lens?