“Whatever is received is received according to the manner of the receiver.” -Thomas Aquinas

Perhaps due to the inclement weather yesterday afternoon, only a small crowd gathered at Blackfriars Playhouse to participate in The American Shakespeare Center’s magnificent performance of Coriolanus. We the audience were called upon to join the actors representing the common citizens of Rome, plebeians rioting against the Roman General Caius Martius. Boo! We righteously pounded our fists against our chests. Because we lacked military service, the general sneered back at us. We shouted, Boo, boo!! But when our city came under attack from a neighboring tribe, he joined the forces bravely defending Rome. In a desperate battle against his archenemy, Caius Martius (René Thornton, Jr. pictured below) almost single-handed achieved victory. Hurrah! Upon his return to Rome, he was awarded the title of “Coriolanus.” Hurrah, hurrah!! 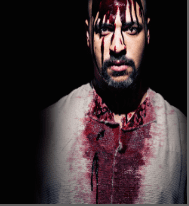 Coriolanus’ mother, proud of her son’s many wounds, urged him to pursue the position of Consul. For a short time, we the audience became the Roman Senate, cheering for our fellow patrician. Hear, hear!! Then we became plebeians again, and our representatives, the Tribunes, swayed us to oppose Coriolanus. Down with him!! He flew into a rage against us. Plebeian power over the patricians allowed “crows to peck the eagles,” he said. Our tribunes condemned him as a traitor and ordered him banished. Exile, banish him!!

Coriolanus sought out and joined his archenemy, and they plotted an attack against Rome. The plebeians panicked. Again Coriolanus’ mother interceded, this time to save Rome. Her “mama said there’d be days like this” soldier-boy backed down only to be killed by his archenemy for betrayal.

Thus ended Shakespeare’s commentary on politics, politicians, and the demos, we the people. Our tragic hero triumphed then failed due to pride and arrogance. We plebeians liked his single-minded willingness to put his life on the line for us but disliked him for his contempt of public opinion—our opinions. Though his loyalties wavered according to his passions, so did ours.

As Keith and I drove home after the performance, an icy mix began to pelt the window shield. The temperature wavered downward. Mountains and oncoming cars along the Rockfish Valley were topped with snow.

Would we battle the forces of nature, would we succeed in making it home? Our car climbed the mountain road, higher and higher. We saw a dusting of snow in the surrounding forest. After pulling safely into the garage, we opened the garage door to the cheering tail wags from our loyal dogs. “Thank you for safe delivery home,” we prayed to our master.

“Whatever is received is received according to the manner of the receiver.” -Thomas Aquinas