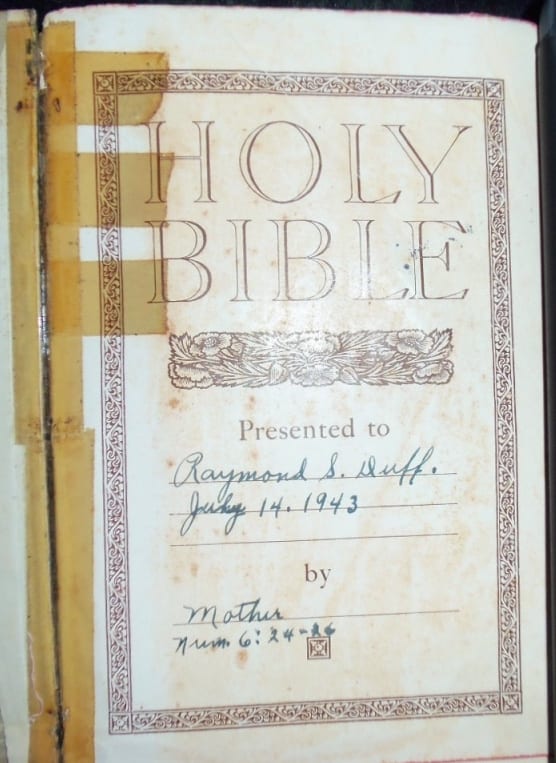 My grandmother sent this Bible to my father when he was in the middle of infantry training in North Camp Hood, Texas. She referred him to a passage in the book of Numbers about God’s protection, grace, and peace. It was the summer of 1943, and my father was nineteen years old.

The Bible rested on a shelf near his bunk. He was in Company H of the 43rd infantry battalion, likely going to North Africa. Some of the trainees died that summer, but not my father.

A scandal developed about the deaths, and the unit was disbanded. The Army ordered my father to Laramie, Wyoming where his Bible sat on a dorm room shelf. At the university, he took a full course load in engineering. Then he stuffed the Bible into his duffel bag again and went by train to Moscow, Idaho for a semester of studies at that university.

Before boarding a troop train bound for California, he was hit in the groin by an ice-ball during boisterous horseplay, a late-season snowball fight. On his way to California, his Bible in its traveling place, he suffered nausea, pain, and fever. He was hospitalized upon arrival, and his unit deployed without him.

In the fall of 1944, he took his Bible on the rail again, first home to Maine for a visit then to an Army camp near Joplin, Missouri. There he bought my mother’s engagement and wedding rings. Next his Bible traveled to Philadelphia then Manchester, New Hampshire, New York, and by boat to Le Havre, France and by rail to Paris. After a few hours in Paris, he was ordered to the airport.

The war in Europe was ending, and my father’s training as a forward observer, directing artillery and mortar fire, was needed elsewhere. Because an artillery observer controlled a large amount of firepower and operated within visual range of the enemy, he was considered a high-priority target, his life expectancy measured in hours. My father flew to the Azores, Newfoundland, and LaGuardia then landed at Fort Sill, Oklahoma, his Bible in his duffel bag all the way. Then the war in the Pacific ended, too.

My parents married in Maine on Wednesday evening, November 28, 1945. My father’s Bible then traveled to Fort Bragg, North Carolina and later Fort Knox, Kentucky and to the separation center in Indiana. At the University of Maine, the Bible sat on a shelf where my parents lived while my father completed his degree in pre-medicine. Then they all traveled to Connecticut and Yale School of Medicine. There they stayed for his career in pediatrics and the rest of his life.

Before he died, he gave his Bible to my older sister. Last year, she asked if I would like it, and I said yes. I plan to have the Bible rebound for the next generation. There’s a story about it, which I’d like his grandchildren to know, and the benediction marked by a mother for her child.