Not quite nineteen the summer of 1970, I was a member of The Edward Malley Company’s College Board. Malley’s was a now-defunct department store in New Haven, Connecticut, similar to and competitive with Macy’s. I worked retail that summer, spending the rest of my semester breaks during college in the Credit Office, a better fit for my analytical skills.

But my older sister had served on Malley’s College Board so I followed suit. We fashion-savvy college girls were meant to attract customers to buy the ‘right’ clothes for college. Working in conjunction with Mademoiselle Magazine, the store gave us pink, purple, or brown suede mini-skirts with matching fringed boleros, “following the exciting Western and Indian fashion trends so important this fall,” the publicity blurb announced.

Earlier that summer, standing for promotional shots on Henry Moore’s Draped Seated Woman at the Yale University Art Gallery and at various other campus locations, I snagged my panty hose. A run of monumental proportions ran up and down the front of one leg. And it was a typical, New Haven humid day, causing my long hair to poof into lumps and bumps. I need not have worried about my appearance; the grainy newsprint disguised all manner of imperfection.

The in-store mentor trained us to circulate around the store and perform in fashion shows. That summer, I wore my first and last pair of false eyelashes, like wearing caterpillars. I learned how to change clothes and accessories and touch up makeup in 30 seconds or less—a useful skill. We girls also performed at a women’s luncheon and one late afternoon show at the New Haven Country Club, trotting across the runway wearing tights, men’s shirts and ties among other outfits. 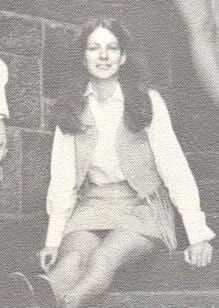 One day, I was scheduled to work in prime real estate, the up-scale women’s clothing department. They carried fine labels like Pendleton and Evan Picone, classic styles that never went out of fashion. A middle-aged woman came to try on an Evan Picone wool suit. As I checked the fit upon her request, I noticed her thickened waist, and she noticed my name—we College Board girls all wore nameplates, and our pictures were prominently displayed wherever we were assigned. It turned out her son had been in my older sister’s high school class. She thanked me for my help and bought the suit, saying she would take it to her tailor to have it fitted to her figure.

Now I’m a woman with a thickened waist, a woman applying for Medicare, a woman who appreciates the lessons from that summer, including the one from the middle-aged woman who bought classic clothes and had them fitted to who she was.

It’s not exactly true that people never think about you. Of course they do, and I have opinions about other people, too. But it’s freeing not to worry so I can get on with my mission, what fits me better.