One night in February 1998, with telecasts of the winter Olympics dominating the ratings, NBC’s Today show weatherman Al Roker walked onto the set of Late Night with Conan O’Brien. He joined a sketch called “Nobody’s Watching.” True confessions, because nobody was watching.

Roker looked into the camera and said, “I have no interesting whatsoever in the weather.” The joke got a lot of laughs.

In Creative Nonfiction’s Winter 2016 issue, dedicated to The Weather, writer Joe Fassler interviewed Al Roker. He became a weatherman by accident. In a college, as a radio and TV major, Roker took a class in meteorology to fulfill a science requirement then got a job as the weekend weatherman at a local station. Later, in Washington, DC, he met Willard Scott, then Today show’s weatherman.

“He said never give up your day job – you can get full of yourself,” Roker quoted Scott. “The other thing was: be yourself. Because, at the end of the day, that’s all you’ve got.”

In 1996, Roker replaced the ailing Scott on the Today show and began his signature style of forecasting as a TV personality interviewing people outside the studio. Being himself.

“Look, there are people on the air who are far better meteorologists than me. I don’t make any bones about that. But at the end of the day, people watch TV for people.”

For Roker, weather is storytelling. In his most recent book Storm of the Century, he tells the story one of most dramatic weather events: the 1900 hurricane that devastated Galveston.

How did he find the time? He wrote in airport waiting areas, on planes and trains, but he also worked with a collaborator. “You’re foolish if you don’t recognize your strengths and your weaknesses,” Roker said. “A factual book takes a whole different set of chops, and that’s not me.”

Weather can be powerful, dramatic, and as such reveals our human side, both heroic and otherwise. “So storms and severe weather can act like a mirror?” Fassler asked.

“Almost a magnifying mirror,” Roker said, referring to what he learned from the Galveston hurricane. “You start to question yourself: what would I do? We all think we would do the right thing, but until presented with it, you’ll never really know.” 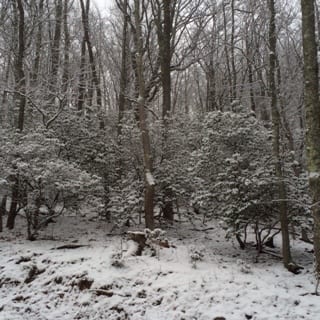 Last Thursday evening, snow fell here at Vanaprastha. Nothing dramatic. The next morning, I looked out the window. Nobody was watching. I saw my face mirrored in the window. No magnification. Then I sat down to write. Being myself.

Later, in the evening, the enormous clarity of sky and stars reduced me to what I am, a mere mortal at the mercy of the elements. What I would do in a catastrophic weather event? I don’t know. I wasn’t tested that day. But that night, I slept, at peace in God’s universe.