Cato puppy huddled in a tight ball on the floor of the front seat. Drool flowed from the sides of his mouth like two leaky faucets. He cried out in pain and began to shake.

Was he going into shock? Would he die before I could get him to help?

“Good boy, Cato, good boy. Hang on. We’re almost there.” I repeated those words all the way to the vet in Crozet.

Keith and I had given our three dogs their first-of-the-month showers—I wash them in the basement shower, and he dries them on the deck. Heathcliff and Cato wandered around the deck and terrace while Keith gave Freya an extra rubbing because of her thick coat. Gathering up the towels, I noticed Cato’s unusual behavior: nervous shying, restlessness, confusion.

“Cato’s acting funny,” I said to Keith. “I’m going to bring him inside and see if that will settle him down.”

It didn’t. He paced and cried out and drooled. His muzzle swelled. We wondered if he’d been stung by a bee or bitten a copperhead, as Freya had six years ago. When she got snake bitten, blood flowed from her drool, and her neck swelled. Cato wasn’t exhibiting those symptoms—and we couldn’t see a puncture wound—but we knew he was in serious trouble.

The local vet was closed, so I called Heathcliff and Freya’s vet in Crozet. “Bring him, we’ll see him immediately.”

Some dogs, like some people, are hypersensitive to insect stings or bites. Severe reactions, which usually occur within minutes, include swelling around the head and neck, hives, difficulty breathing, excessive drooling, agitation, vomiting or diarrhea, dizziness or disorientation, and seizures. Anaphylaxis from insect stings or bites can be fatal.

After pulling into the parking lot, I called the vet’s number. Because of COVID protocols, conversations take place by phone or in the parking lot.  “We’re here,” I said, “Cato’s on the floor of the front seat.”

The vet tech ran outside, released Cato’s collar, and looped a loose lead on him. “Do you know what bit him?”

“I’m not sure, we didn’t see it happen. He’s not drooling blood or swelling around his neck like Freya did when she got snake bit. Maybe a bee sting?”

“I’ll take him in and be right back.”

“He has a deep puncture wound on the side of his nose—that’s all we could find. Snake bites aren’t usually that deep, and generally there are two puncture wounds. We gave him a steroid, antihistamine, and something for the pain. Come back at 5:30. We’ll monitor him, but if the swelling doesn’t go down, or we find another puncture, you’ll need to take him to the emergency clinic in Charlottesville. They’ll establish an IV and monitor him overnight.”

Thank goodness, Cato responded well to the treatments. When I came to pick him up, his muzzle’s swelling had diminished. Allergic reactions can be delayed, the vet told me, so watch him closely for the next eight to twelve hours.

“Give him 3 Benadryl 25mg and 2 to 3 half pain pill pieces every twelve hours, starting tonight. Curtail his playtime with other dogs until Monday. He might not react well to rough play.”

“How common are insect reactions like this?” I asked.

“I see twenty to thirty cases a year. Dogs shake off bites on their bodies, but anything on the face, neck, or muzzle can cause a reaction. The good news is dogs are opposite of humans. The first sting can kill a dog but the second is usually a non-event. I’ve only seen two repeats in my career. But it’s the second sting that can kill a human.” He paused. “You did the right thing, bringing him in.” I thanked the vet and drove Cato home. 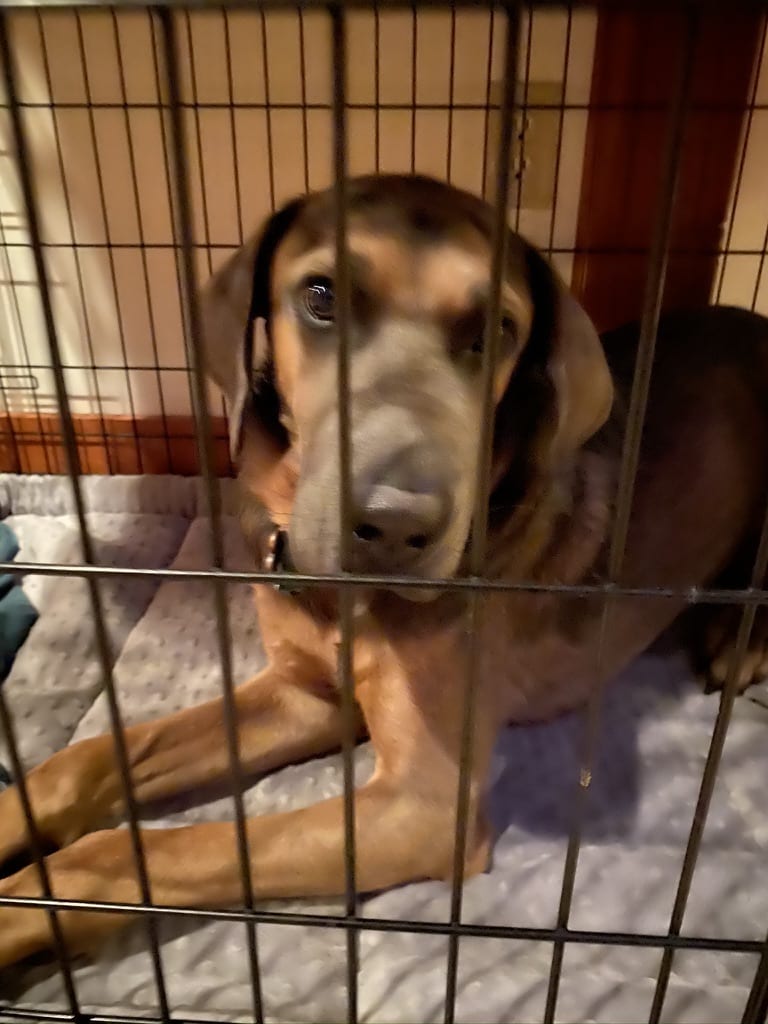 He ate his dinner with Heathcliff and Freya then curled up on his crate, as here, his muzzle still swollen. I checked him before going to bed and again in the middle of the night. The next morning, Cato was subdued, probably from the meds. But two days after the bite, he was off the meds and back to his old self, running the mountain and pestering Heathcliff and Freya.

Cato is a curious fellow, sticking his muzzle into just about everything, so he’s likely to get stung again. The sting will probably be a non-event. But I’m holding onto the pain medication and keeping Benadryl on hand just in case.