The March of Folly

9 The Lord became angry with Solomon because his heart had turned away from the Lord, the God of Israel, who had appeared to him twice. 10 Although he had forbidden Solomon to follow other gods, Solomon did not keep the Lord’s command. 11 So the Lord said to Solomon, “Since this is your attitude and you have not kept my covenant and my decrees, which I commanded you, I will most certainly tear the kingdom away from you and give it to one of your subordinates. 12 Nevertheless, for the sake of David your father, I will not do it during your lifetime. I will tear it out of the hand of your son.
1 Kings 11:9-12

The son who succeeded Solomon was Rehoboam. Instead of listening to his elder advisors and the groans of the people of Israel, Rehoboam ruthlessly increased the people’s burdens until they rebelled. Israel and Judah split into two kingdoms; Rehoboam remained king of Judah only. Disunited, the twelve tribes were less able to ward off aggressors and, as the saying goes, the rest is history. 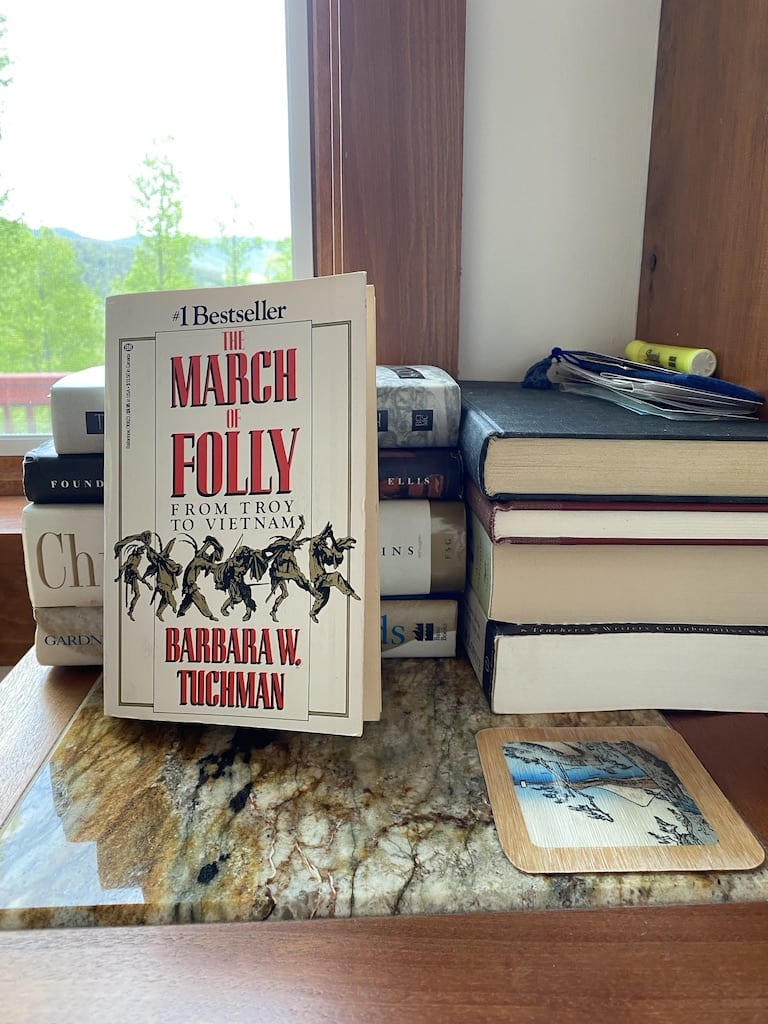 During these stay-at-home days, I’m reading down the to-be-read piles on my end table. Last week, the book was Keith’s copy of The March of Folly: From Troy to Vietnam, published in 1984 by Pulitzer Prize-winning historian Barbara W. Tuchman. After citing some well-known individual examples of folly in government, including Rehoboam and Montezuma, Tuchman employed the Trojans taking the wooden horse within their walls as the model for her thesis, fleshed out in more lengthy case studies of the Renaissance Popes’ behaviors provoking the Protestant secession, the British incompetence in the loss of America in the 18thcentury, and the United States betraying her values in Vietnam.

Tuchman set the following criteria for misgovernment as folly:

Not that it’s easy to figure out whether you’re hearing the voice of Wisdom or Folly. Read Proverbs 9 and notice both ladies speak the exact same “come to my house” words, as I noted in this post written a few years ago. So how do you tell their voices apart? Tuchman offers some guidelines.

First, ask if the policy currently pursued is contrary to the institution’s self-interest. Is it going to advance or doom the country or institution, as in the case of the Renaissance Popes who ignored their spiritual duties in pursuit of earthly pleasures, leading to the loss of huge numbers of the Catholic faithful to the Protestants. Second, folly is often the dominant voice, as in the case with the ruling class in 18th century England, but there are always soothsayers, prophets, or voices of wisdom within the system. These are quiet voices, who offer feasible alternatives, often silenced. Third, listen for the groans of the people, which “the best and the brightest” tend to dismiss, as in the Kennedy administration vis-à-vis Vietnam, or the career and ego-driven dismissals of protesters during Johnson’s presidency.

Commenting about politics is not my calling even during these unsettled, stay-at-home times. But when I notice slivers others’ eyes, as I did while reading Tuchman’s The March of Folly, I know there are logs in mine. And although perspective is difficult when thinking about current policies, I’m always called to discernment. To swim against prevailing cultural tides, to seek the quiet, dissenting voices of wisdom, to hear the groans of the people—all of the people—and to keep the Lord’s commandments with all my heart.