Columbus Day as story and history

It’s October 1957, and I’m in first grade, coloring a worksheet that features outline drawings of three ships. With colored pencils in hand, I carefully print the ships’ names: Nina, Pinta, and Santa Maria. 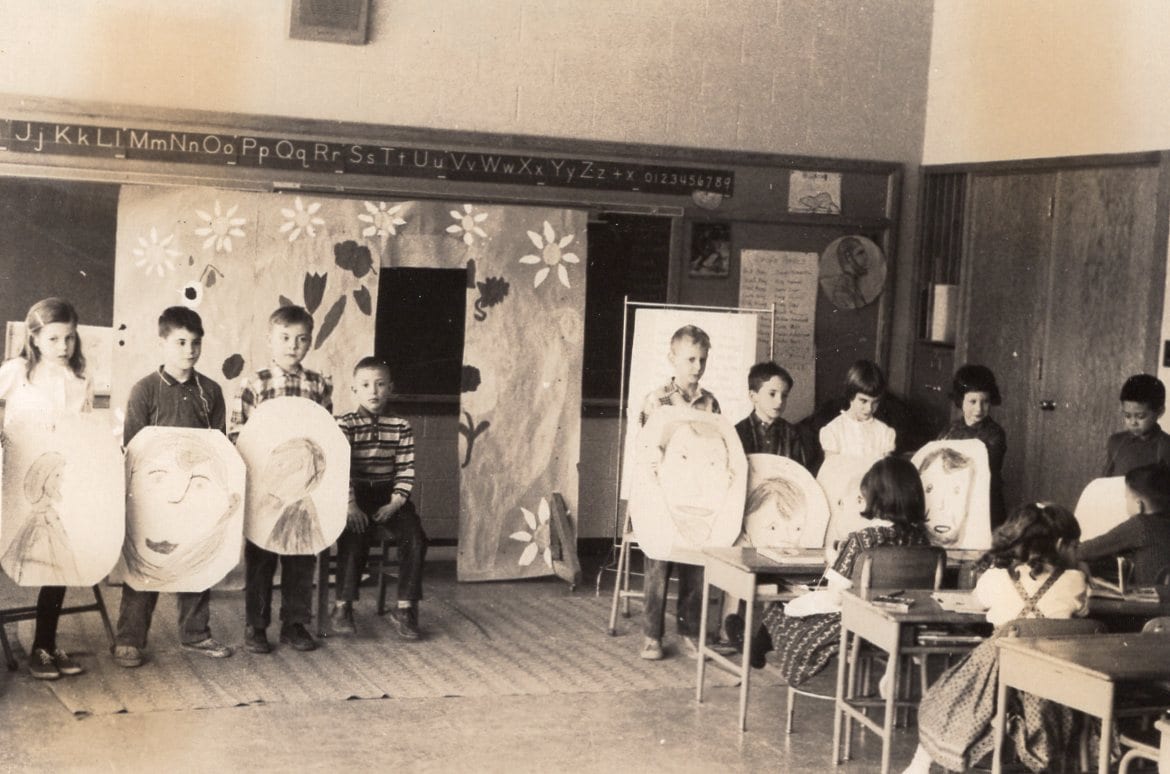 A year and a half later, in second grade, my classmates and I put on a Lincoln pageant to mark his February birthday. I remember painting the set and, on the day of the performance, lining up in front of the class wearing my Lincoln penny drawing, front and back, like a sandwich board. As I recall, my parents took this picture— I’m third from the right, the girl with a bowl haircut and bangs in the middle of her forehead, standing rigid, head bowed, trying not to wiggle.

In grade school, history was an illustrated story to read or write, color, draw or paint, or recreate on stage. I loved stories, especially those about people who overcame obstacles. Our play about Lincoln focused on his gaining an education despite poverty. As for Italian navigator Columbus, we learned about his struggle to secure sponsorship for his trip to sail west to find the East Indies. The three-month voyage, subsequent voyages, and explorations must have been perilous—and filled with the excitement of discovery.

My later studies of history in high school, college, and beyond focused not so much on the story about Columbus but on historical investigations of the Columbian Exchange. Plants, such as my garden-raised tomatoes and these store-bought potatoes, spread from the Americans to Europe, becoming dietary staples. The exchange of animals largely went the other way. Native Americans adopted horses, pigs, cattle, sheep, goats, chickens, and large dogs—like Freya and Heathcliff, our German Shepherd and Labrador mixes.

Typical of cultural exchanges, not all was positive. Infectious diseases spread, too, as they had with migrations across Eurasia. Without previous exposure, and centuries to develop immunity, Native Americans fell to measles and smallpox. Yellow fever, thought to have developed in Africa, caused several epidemics among both Native Americans and Europeans. Of course, people had no idea how or why this happened until Louis Pasteur discovered the connection between germs and disease in the mid-19th century. But when we gained that knowledge, we pointed our fingers at Columbus.

We in the United States celebrate Columbus Day, the anniversary of his arrival in the “New World” on October 12, 1492, as a national holiday. Our predecessors celebrated the 300th anniversary in 1792, but Columbus Day was not a federal holiday until President Roosevelt’s proclamation in 1934. Since l971, we’ve marked the holiday on the second Monday in October.

Current celebrations—like many historical celebrations today—are marked by controversy. Instead of balanced history, we focus on negative impacts, especially the culture clash that resulted from the Columbian Exchange and our continued struggles with globalization and the spread of disease. We look for knowledge and for someone to blame, gathering evidence to prove that Columbus was in truth a villain. The same judgment happens with other historical figures, including Lincoln.

There’ll always be knowable and unknowable consequences to human goodness or villainy. This is part of the mystery of faith. One thing we can be assured of: someday the truth will be revealed.

Note: To listen to this post on YouTube, click this link: https://www.youtube.com/watch?v=J0gWMv3P96A. Last week’s post is available, too, under my channel name Carole Duff. I hope to record posts every week from this month forward and improve my skills for your listening and viewing pleasure.