I stood among the angels dressed for the Kindergarten Christmas Pageant. Unlike me, my fellow angels had drums and triangles. My frown—more like a pout—expressed disappointment and covetousness. I wanted the gifts my classmates had been given.

Like the other mothers, mine had lovingly made an angel costume out of a white bed sheet, stiff crinoline, and pipe cleaners for the crown—all edged with gold sparkles. Before the show, she helped wiggly me put on the scratchy costume. She braided my pigtails tight, fixed the itchy crown over my straight-cut bangs, then sat among the other parents who came to watch to their five-year-old children perform.

Toward the end of the show, the Kindergarten teacher nudged me forward, in front of everyone, including Mary and Joseph. I glanced back at the angels, still hoping for a triangle or drum. But the teacher said sing, and so I did.

My mother told me later she almost fell off her chair. She had no idea I would sing a solo. The highlight of the show I never mentioned because I didn’t think of it that way.

I wasn’t nervous. As a baby, I sang before I talked, and we sang at home all the time. Also, I was just doing what my teacher said.

Grudgingly. I didn’t value the gift that came easily and hoped for a gift that wasn’t mine.

Fast forward sixty years. Though still wiggly, I don’t have pigtails or straight-cut bangs or much of a voice anymore. But I still retain a small gift for music.

Instead of singing, I’ll play Christmas carols on my flute when I visit Mother in assisted care this week. I confess, I’m a little nervous, playing after many years without touching my flute. Although I’ve been practicing, some of the notes might sound as scratchy as that angel costume.

No matter. My hopes are different now. Not for a triangle or drum or gifts that are not mine. Rather, to use the gifts I’ve been given to bring joy to others.

To play my best, without fear, for His glory—that is my hope. And maybe this time Mother will surprise me and sing. 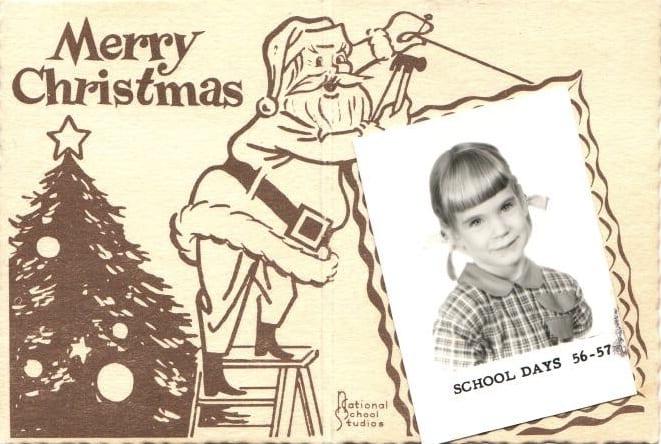 Yet in thy dark streets shineth
The everlasting Light
The hopes and fears of all the years
Are met in thee tonight.

I wish you all a Blessed and Joyous Christmas!