Late afternoon on Christmas Eve, some years ago, my mother looked out the front window of her New England home into fading light and snow. “Maybe your Aunt Louise’s package won’t make it this year,” she said.

No, we assured our mother and grandmother, the package will arrive. But it was getting late, too late for UPS delivery. Or so we thought.

Suddenly, we heard the sound of a truck, driving up the driveway.

“Cinnamon rolls,” we shouted with glee.

My mother smiled and shook her head. “I don’t know how your Aunt Louise does it. Every year her package arrives right on time. Every year.”

We greedily opened the box. A pie, either pumpkin or raspberry, cookies—chocolate, ginger, or molasses—and homemade fudge, like my grandmother (Aunt Louise’s mother) used to make. Chocolate with walnuts, double-layer chocolate and brown sugar (my favorite), and peppermint.

Aunt Louise was a nurse with gifts for generosity and service. As I recall, she began sending care packages to my parents after my father’s stroke in the mid-eighties. She knew we adult children would gather at our parents’ house for Christmas with their grandchildren, since travel was no longer an option for my father.

Even after my father died in the mid-nineties, Aunt Louise’s care packages continued to arrive without fail on Christmas Eve. She also enclosed her handmade crafts, which we distributed among ourselves. I still have a few of her potholders and towels, well used, as you can see.

We children and grandchildren no longer gather for Christmas together, since we live around the world now. But I’ll bet whenever any of us thinks about cinnamon rolls, we remember the sound of that UPS truck coming up my mother’s driveway. And we remember Aunt Louise. 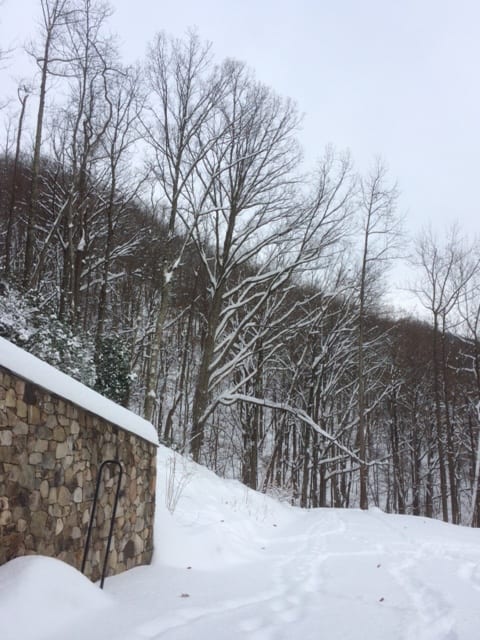 Today, as I bake cookies for holiday gatherings this week and look out the window at yesterday’s beautiful snow on our driveway here at Vanaprastha, I savor sweet memories of Aunt Louise and Christmases past.

May the work of my hands pass her generosity along.