Walking Nose Up and Nose Down

If you get stuck, get away from your desk. Take a walk, take a bath, go to sleep, make a pie, draw, listen to music, meditate, exercise; whatever you do, don’t just stick there scowling at the problem… – Hilary Mantel 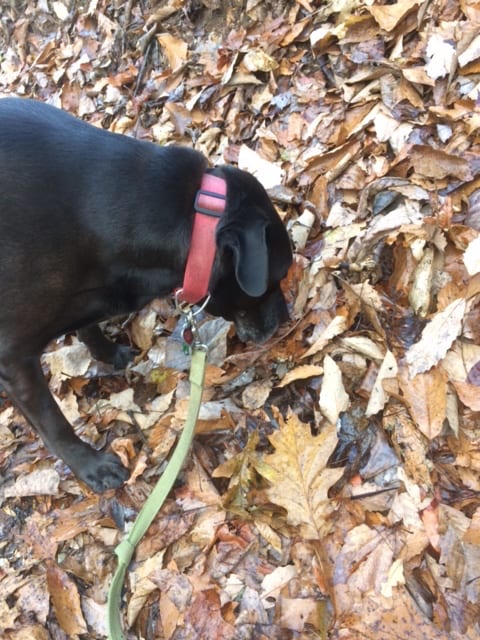 Nose up and walking at a good clip, Heathcliff caught the scent of something irresistible on the side of the mountain road. He pulled at his leash. Nose down. I indulged him, because sniffing helps him get his business done faster.

Not that we were in a hurry.

Since his knee injury in mid-September and surgery in mid-October, Heathcliff and I have been therapy walking. Several slow, short walks every day have increased to three or four at longer distances. One of our daily walks is about a mile, and we now clock three miles total for the day.

That’s a lot of nose up, nose down time.

We used to walk the 2-mile roundtrip to the mailbox together. The mile down the mountain would be manageable for Heathcliff, since his front legs and chest bear his weight downhill, but not the mile up—not yet. Too much pushing on his back legs and hips, like climbing stairs.

So, when I’m done writing for the day, or I get stuck, I put on my trail shoes, sling the mail pouch over my shoulder, and walk to the mailbox solo. Often, my nose points down, sniffing for some irresistible fix to a writing problem.

The other day, I was huffing my way up the first steep slope, nose down and scowling. I heard a voice a few yards away. Nosing up, I saw our neighbor, smiling and coming the other way.

I gave her a hug, apologized for being wrapped up in my thoughts, and asked how things were going. Her husband had been ill for several months and was recovering from a recent surgery. Perhaps she was walking to collect her thoughts, too. I listened to her words then said goodbye.

Hilary Mantel’s advice to writers, quoted above, continued: …don’t make telephone calls or go to a party; if you do, other people’s words will pour in where your lost words should be. Open a gap for them, create a space. Be patient.

The rest of the way home, I scrupulously held my head up, thinking about what my neighbor had said, opening a gap, creating space for what matters. People. Critters, rustling leaves, burbling streams, the sky.

God and His Creation. 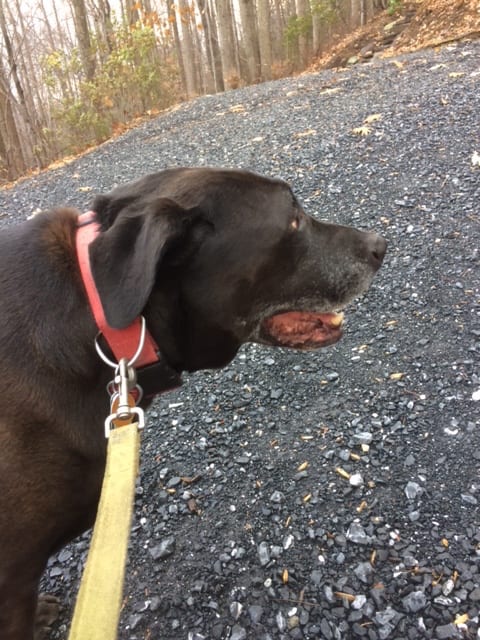 Heathcliff met me at the door, asking for his late afternoon walk so he could do his business. Wait, I said, then quickly scribbled a few words on a notepad.

Sometimes solutions to problems come from keeping your nose up, like Heathcliff does most times.