Shortly after we go to bed, I hear his soft breathing and hope that’s how he’ll slumber throughout the night. Keith falls asleep almost as soon as his head hits the pillow, while I’m still searching for a comfortable sleeping position. Alas, tonight soft breathing progresses to nasal whistling then loud guttural snores. Silence in between snores sometimes last long enough for me to wonder if he’s still alive.

A loud snort tells me he is—alive, that is—and I’m grateful for that. But I’m also wide awake and unhappy. How am I going to get some rest? 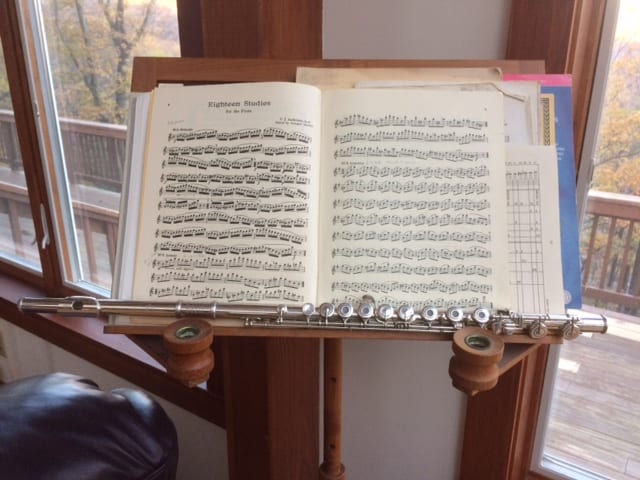 Before practice sessions, I cover the mouthpiece on my flute, compress the keys, and blow straight into the flute to warm the entire instrument. After adjusting both the head and foot joints, I play the chromatic scale from the C above middle C down an octave then up two octaves plus until warmed up. I open a book of Eighteen Studies for the Flute, written by C.J. Andersen and edited by French flutist Georges Barrère.

Then years of silence.

Today, I play the first etude, Moderato in the key of C major, the second, Animato in C major’s relative minor A, the third, Andantino in the key of G major, and the fourth, Allegro animato in G major’s relative minor E. My breath control is poor—I often run out of air before completing a phrase and gasp in awkward places. When my embouchure fails in the high octave, instead of sweet sounds, squeaks and squawks escape my flute. Nothing sounds when my embouchure fails to support the low notes.

I play the etudes slowly then gradually increase the tempo. Difficult phrases are isolated and repeated many times. Making the same mistakes over and over, I grunt then circle the trouble notes with a pencil.

At the end of my practice session, I look up at Keith, reading or writing in the loft above. I tell him I’m sorry he has to listen to my gasps, squawks, and grunts. He says he’s happy to hear me play, because he knows how much fun I’m having.

And he’s correct. I am having fun.

Good fun, recapturing what I loved and still love to do.

In bed at night, I place my hand on Keith’s arm. He rolls over and breathes softly.

And that makes me happy—and restful.