On a Humane Society 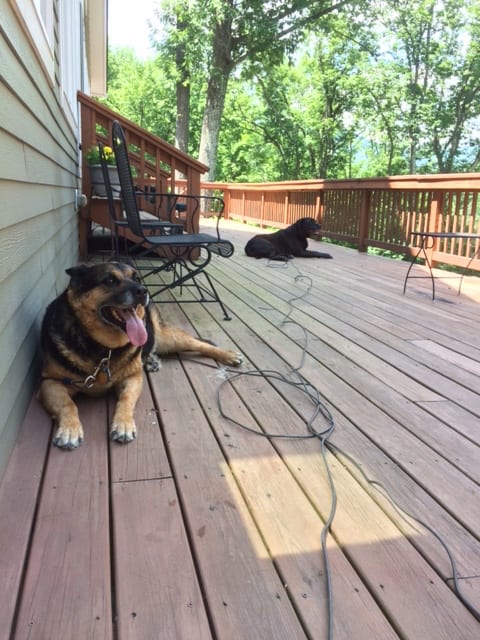 Today is shower day for Heathcliff and Freya—and you know from this post that bathing is not their favorite activity. Here, drying on the deck, they might play bitey-face or snooze. If they hear a vehicle on the mountain road, their whines, yips, and barks alert us, the same as when they’re in the house.

Some people fear dogs, perceiving barks as aggression. Indeed, one should be cautious when entering a dog’s territory, especially if the dog has puppies or is sick, injured, or deprived of food, rest, or exercise. Or if the dog is fearful, the same as humans.

Are certain breeds more prone to aggressive behavior? Or are these behaviors learned? As nature/nurture questions, the answers are no and mostly yes. Like humans, behavior is a combination. And though people tend to be more afraid of dogs than people, humans exhibit far more aggressive behavior compared to canines.

Heathcliff, adopted from the Alexandria shelter, looks like a black lab mixed with something big, maybe Great Dane or Mastiff, but there are times when his head and eye shape and facial expressions look like a sweet, grinning pit bull terrier. Freya, who was a local shelter dog, looks like a shepherd mixed with something solid, maybe a Rottweiler. But who knows? “The majority of mixed-breed dogs in America are not crosses of two purebred parents,” Dickey wrote. “Because the number of genes that determined a dog’s shape is extremely small, and so many variations within those genes are possible, looking at a dog’s physical chassis and making a guess as to its probably heritage will inexorably lead to error.”

Yet people judge on appearance all the time. And the media has a field day when a dog, especially one perceived as a blood-thirsty pit bull, snaps or injures or kills, an extremely rare occurrence though you’d never know it. One incident, regardless of circumstances, is all it takes. After her book’s publication, Dickey was harassed and threatened by those who wish pit bulls banned, even wiped from the face of the earth.

In her last chapter, Dickey profiled a Humane Society outreach initiative called Pets for Life. Initially, the program was called End Dogfighting in Atlanta, Chicago, Philadelphia, and Detroit. No one showed up. Now during Community Days in targeted neighborhoods (zip codes) without veterinary services, Pets for Life offers animal vaccinations, sign-ups for spay and neuter appointments, dog-training, pet supplies, including leashes, collars, and food—all for free. Pet owners show up hours in advance.

“No one responds well to having their emotional relationships dictated by someone else telling them what shapes of dogs they can and cannot have,” Dickey wrote. “The best chance that those who care about animals have to reduce these problems seemed to come from keeping animals in the homes they already have and supporting positive, healthy relationships between people and their canine companions.”

Loving dogs and people as ourselves.