Last Thursday night, the wind blew hard against our windows. Our dogs Heathcliff and Freya huddled in our bedroom. Heathcliff shuffled between the window and my side of the bed, but overall managed his anxiety well.

Early Friday morning, the lights flickered then went out. Our whole-house backup generator sputtered then ignited. It hummed until Saturday afternoon when power restored. The wind blew well into Sunday.

“March comes in like a lion, out like a lamb.” Where did this saying come from? I wondered.

The Farmers’ Almanac: “With March being such a changeable month, in which we can see warm spring-like temperatures or late-season snowstorms, you can understand how this saying might hold true in some instances. We can only hope that if March starts off stormy it will end on a calm note, but the key word is hope. However, this saying seems be to more of a rhyme rather than a true weather predictor.”

A meteorologist: “The truth is, ‘in like a lion, out like a lamb’ has more to do with astronomy than meteorology. This old folklore has to do with the constellations of Leo the Lion and Aries the Ram (or lamb). If you… look above the western horizon, you’ll see the dim stars that make up Aries. If you turn around and look east at almost the same height above the horizon, you will see the constellation Leo. Its stars form a sort of backwards question mark. So, the Lion is rising in the east in early March, meaning the month is coming in ‘like a lion.’ Fast forward to March 31, and Leo will be almost overhead, while and Aries the Ram (lamb) will be right on the western horizon, preparing to set. With the lamb setting in the west, the month is going out like a lamb.”

An online news article: “According to another theory the saying is biblical. Jesus’s first appearance was as the sacrificial lamb, but he will return as the Lion of Judah, hence those symbolic animals. Inconveniently though, the [proverb] definitely put the lion first.” 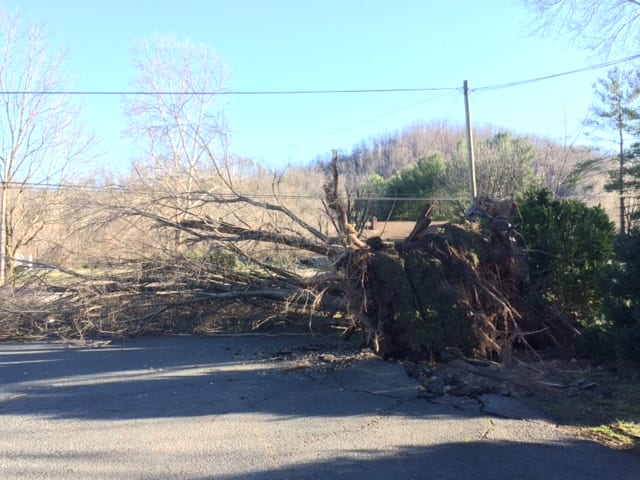 On Friday, during the wind storm, Heathcliff and I played “stick” as we walked down the mountain road to the mailbox. There were many sticks from which to choose, and our walk took well over an hour. The next day, on my drive to Charlottesville, I noticed many downed and uprooted trees, lining the roads in the Rockfish Valley, one in the Post Office parking lot (pictured left) and another landing on a house. 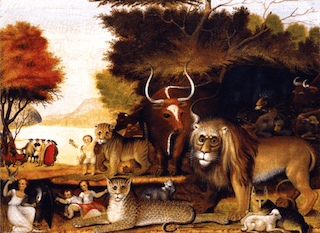 Sunday, the wind calmed and the sun shone brightly through the trees. The lion had become a lamb. I was reminded of Edward Hicks’ Peaceable Kingdom paintings (one pictured right) based on Isaiah 11:6.

The wolf will live with the lamb, the leopard will lie down with the goat, the calf and the lion and the yearling together; and a little child will lead them.

The Messiah’s kingdom, when fully realized, shall be one of perfect peace.