I don’t want to play Flight of the Bumblebee

Last Friday, Keith and I ventured out in the rain to have lunch at Blue Mountain Brewery. We figured there wouldn’t be too big a crowd. On the drive home, pleasantly full of salad, pizza, and iced-tea ambition, I said, “Now that my cold is better, I’m going to play my flute — you know, part of my “For Thy Glory” resolution. Got to build up embouchure, wake up muscle memory in my mouth, and fingers, too.”

“I don’t know how that works in reed instruments,” Keith said.

On the approach to Nellysford, the speed limit decreased to 45 mph. “Lower pitches are my favorites,” I said, “the tones that sound so beautiful in places with good accoutics, like church. I always had nice tone but never enough dexterity to be a professional — not coordinated enough to play Flight of the Bumblebee. I don’t think age and arthritis have improved my agility.”

“But I don’t want to play Flight of the Bumblebee.” I sang a few bars of the Bumblebee with frantic inaccuracy. We passed Flying Fox Winery. “It makes me feel like fleeing,” I said, “all that crazy busyness — been there, done that.”

Later, beyond Nellysford, the speed limit returned to 55, and I sighed. “I want to fill the sanctuary with slow, rich harmonics. But I suppose it’s not up to me. If God wants me to play Flight of the Bumblebee then I’ll play it.” 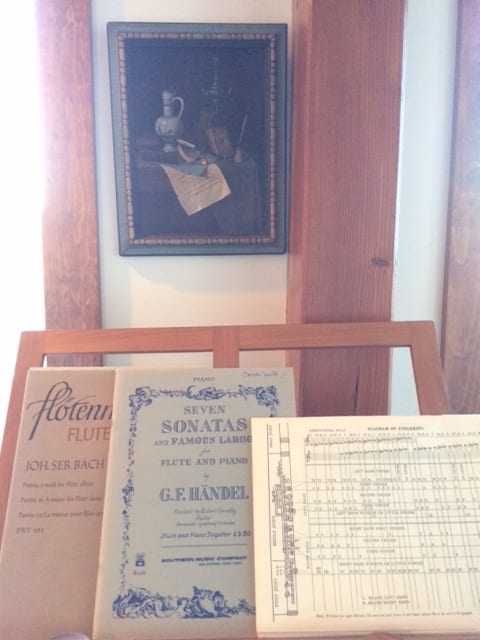 We turned onto the winding mountain road and slowed. Maybe an unhurried Flight, I thought, a bumblebee that flies leisurely routes then lingers over the gentle beauty of God’s creation. All for His glory.

What does God want you to play?