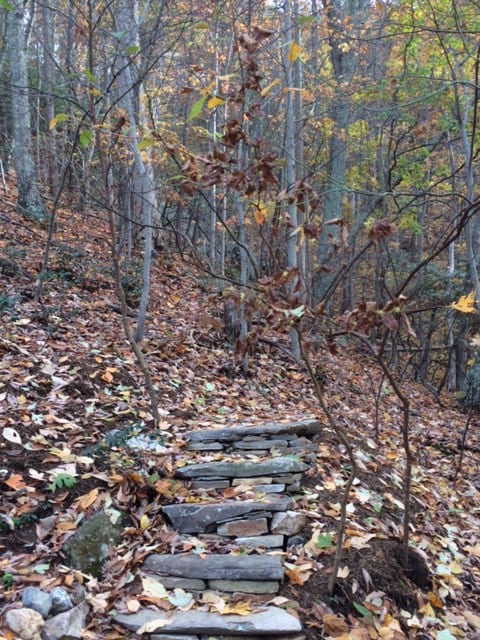 Fall Number 1: Mid-day last Friday, our landscaper arrived to map out a trail from the back slope up to a flat rock out-cropping. Keith and I wanted his crew to create steps up to a natural picnic area overlooking the ravine. I led the way, scrambling among trees and mountain laurel. Our landscaper and Keith followed.

The landscaper and I reached the out-cropping and looked back. Keith was making slow progress. He kicked his polio-depleted right leg, established a footing then slid on the dry leaves carpeting the forest floor.

“Oh,” the landscaper said with concern. I smiled and replied, “He’s fine; he’ll be here soon.” The landscaper said he wished all people had that much gumption, and I answered, “Yup, knowing how to fall and keep going is a blessing.”

It’s not hard to see parallels with the falls among Hollywood personalities, politicians, and Game of Thrones soap opera characters. Those that survive their falls need to find ways to rise and keep going.

Fall Number 3: For some, the story of the adulterous woman in John 8:3-11 points the way. Mosaic law commanded a fallen woman like her to be stoned. But Jesus said, “Let any one of you who is without sin be the first to throw a stone at her.” And no one did, for all had fallen short; nor did they condemn her. “Neither do I condemn you,” Jesus said to the woman. “Go now and leave your life of sin.”

Fall Number 4: While the landscaper and I stood on the rock out-cropping last Friday afternoon, Keith problem-solved his way up. He never lost his optimism, never showed any embarrassment or impatience with his natural state. He slid backwards, chuckled, and kept going. With this quality, and many others, I fell in love.