Perhaps this old nursery rhyme, chanted by children when ladybugs landed on them, originated among farmers in England. They knew the value of ladybirds, as the bug was called, in reducing pests among crops. After harvest, farmers would burn their fields but first warn their ladybirds to “fly away home.”

The rhyme has roots in historical and religious events, too, but my interest today is natural.

After October frost in the Rockfish Valley and a few inches of snow at upper elevations the day before Halloween, temperatures climbed into the 70s this past Thursday—the first warm day since the chill. And that meant… Ladybugs. 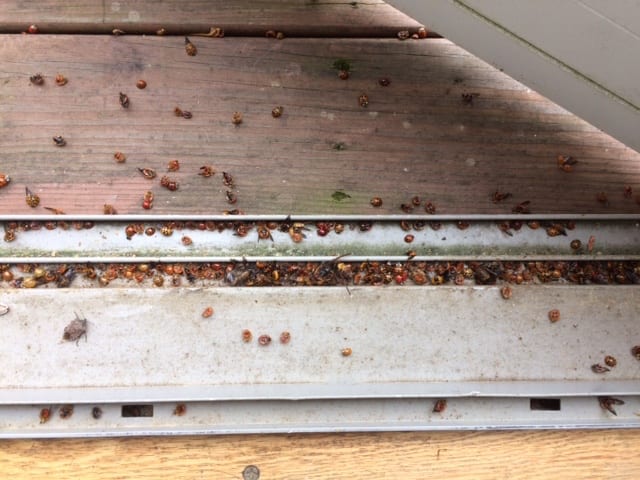 Thousands of “cute” little ladybugs swarmed on outside walls, windows and doorways, looking for a way inside to spend the winter in the warmth of our homes. Some made it, some didn’t. Those that died released an odor similar to stinkbugs and sometimes left yellow or brown stains.

Yuck is the technical term.

According to a 2012 article published by Virginia Tech News, the Entomology Department of Virginia Tech is not to blame for the swarms, though they receive complaints every fall and spring during ladybug infestations. “Multicolored Asian lady beetles, the actual name of the invasive bugs, were introduced in the South between 1916 and 1985 to rid pecan crops of destructive aphids, not stinkbugs,” the article stated.

I’m big on blame, too, because it did cross my mind that the folks who brought us Asian lady beetles might be related to kudzu and stinkbug introducers. Those of you who’ve been following my blog for a while know what I think about stinkbugs.

Moving from one end of the house to the other, I broomed the dead bugs into piles, scooped them up with the dustpan, and pitched them in the trash bin. A hand vacuum worked well, too, though I had to change the bag more often because of the stink. Then I swept the fallen off windowsills and stairs into the palm of the hand then threw them into the toilet. My husband regularly swept, too.

Within a few minutes, it was as if we’d done nothing. What. So. Ever. “Ladybug, ladybug, fly away,” I chanted.  But they kept coming like a plague of Biblical proportions.