What About Those Rolling Stones?

Rain showers punctuated the day, and last night wind ushered in a cold front. Acorns and small branches battered the outside deck like gunfire. Our two large dogs huddled in the basement man cave while Keith and I watched Ghost Story, the 1981 film starring Fred Astaire, a tale about four old men haunted by a fifty-year-old secret.

Mid-movie, our house lights flickered then went out. We sat in darkness until the backup generator started. I reset clocks; Keith reset the DVR; we finished the movie.

At bedtime, the generator’s loud purr masked the sound of gusting winds. Freya curled up next to Keith’s side of the bed, and Heathcliff beside mine. But before we dropped off to sleep, the generator turned off—power restored.

The howling wind stirred Heathcliff’s anxiety. I heard his toenails click, click, click on the wood floors as he paced between the great room and our bedroom. He repeatedly checked the bedroom window, lay down, got up, and muzzled my elbow. By 11:00, he was panting in terror.

I bundled pillow, robe, and blankets then took Heathcliff back down to the man cave, a safer haven. He settled on his dog bed, and I made a bed out of the sofa. We listened to the muted sound of wind and worried.

Last week, the landscape crew completed the back slope boulder garden, about which I wrote here—note the “before” picture. I wasn’t worried about a literal landslide of rolling stones—I had faith they would hold. But as I lay on the basement sofa, I fussed about everything else, all those old secrets I keep in dark places.

I rolled around then dropped into a light sleep, which is all I can hope for sprawled on that uncomfortable sofa. After midnight, I crept back upstairs and climbed into bed beside Keith, hoping Heathcliff would stay in the basement and sleep. Sometimes it works, sometimes it doesn’t.

It didn’t. I heard the click, click, click of Heathcliff’s toenails and his muzzle on my arm. As a pup, he’d been shut in a basement crate all day and night, we’d been told when we adopted him, and I would never do that to him. I sighed. We’d just have to deal with those rolling stones.

“A rolling stone gathers no moss,” the old proverb states. A “rolling stone” is often interpreted as a person with no roots, responsibilities, or cares. Another interpretation focuses on the “moss” as stagnation and “stones” as movement, creation, and growth. I’m not the first kind of rolling stone—I’m rather fond of moss—yet I also like activity, creativity, and growth.

I lay in bed, listening to the wind, wishing Heathcliff would settle then thinking about the 500th anniversary of the Reformation celebrated this week. Sola Gratia, Sola Fide, Sola Scriptura. My Rock. I opened my inner self to God’s grace and asked for help with faith—all those worries that haunt me. I prayed for my family, friends, and neighbors, for those restoring power, traveling, and taking care of others in the middle of the night. 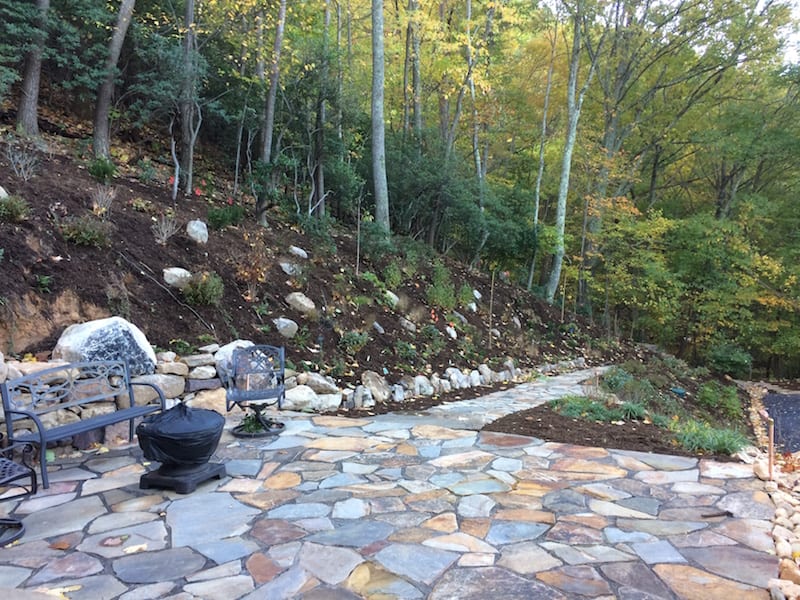 This morning I read Scripture on another blog I follow: Likewise the Spirit helps us in our weakness; for we do not know how to pray as we ought, but that Spirit intercedes with sighs too deep for words. Romans 8:26

Then I took an “after” picture (right) and wrote this post. What about those rolling stones?