She knew the marriage wasn’t going to work 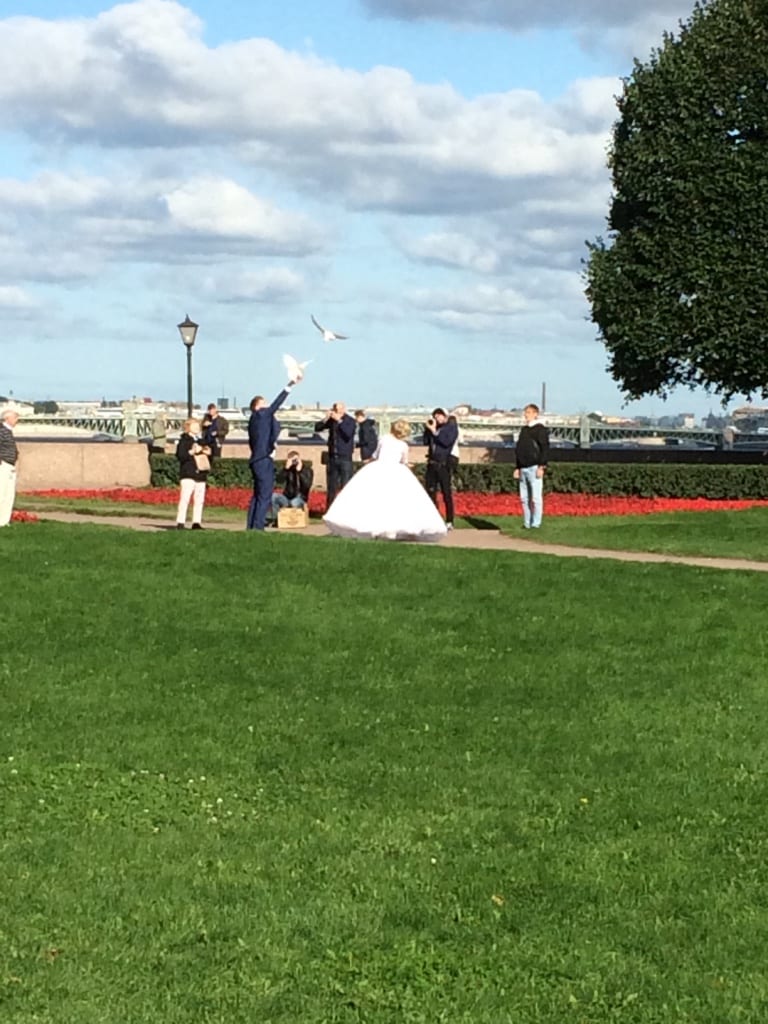 Crossing the bridge onto Vasilyevsky Island, tour escort Julia pointed out the old Saint Petersburg Stock Exchange and two Rostral victory columns marking the Strelka or spit of the island. “This area is popular, especially for wedding parties taking pictures,” she said. Sure enough, after strolling the curved shoreline path between the columns, Keith and I came upon a young bride and groom with photographers handling two doves.

The sun shone, but winds off the Neva River and Gulf of Finland chilled. Back on the bus, we asked Julia about marriage in Russia.

“Girls want to marry early and have a baby right away,” she said, “I don’t know why. My younger brother was in his twenties, his girlfriend nineteen, not through college.” Julia rolled her eyes. “I paid for the wedding even though I knew it wasn’t going to work.”

“Then why did you pay for it?” several of us asked.

“Oh, you know families. My mother said I should pay so I did along with others. My brother’s wife had the baby then they divorced.”

In his 2016 essay, “When you marry the wrong person,” Mockingbird Ministries director David Zahl reviewed Alain de Botton’s New York Times article, “Why You Will Marry the Wrong Person.” We used to join together for practical reasons, de Botton stated, economic, political, and logistical. Now we marry based on sentiment—feelings. Yet affections are fickle, expectations doomed to failure. He argued for marriage based not on romance but on pessimism, which “…relieves the excessive imaginative pressure that our romantic culture places upon marriage.”

Zahl agreed, in part: “Love must have something other than emotional fulfillment at its fulcrum for it to abide.” Then he advanced a model beyond de Botton’s horizontal atheism. A vertical model for marriage is not one of expedience or mutual gratification, Zahl wrote, but of sacrifice where the sign of fidelity is “…not a ring but a cross.” Brides and grooms know they’ll marry the wrong people because that’s all there are: “…none of us are very good at loving or being loved,” Zahl stated.

Once everyone returned to the bus, Julia told us the divorce rate in Russia is eighty percent. “Eighty percent?” we gasped. “Why?”

“I don’t know. Maybe some have affairs, but my brother was too lazy to have an affair.” We laughed with surprise. “No really, he said, why have an affair? One wife is enough, plus it costs money and time. My brother goes to work and comes home, that’s it, but he wasn’t very nice to his wife. She knew that about him—they’d been together since she was fifteen—but said she’d changed her mind. She didn’t want to be married to him anymore.” Julia shrugged.

Russians can only marry once in the Russia Orthodox church, she said, and many do. Over seventy percent identify with that faith, although few attend services regularly or have ever taken communion. All other marriages are civil ceremonies after which they take pictures at famous sites.

As the tour bus pulled away, I looked back at the bride and groom. The doves flew into the sky then returned to earth.