I’m posting a few days late this week because Keith and I just returned from a family excursion to see the eclipse within the path of totality. During the trip, I collected stories. This is the first of four. 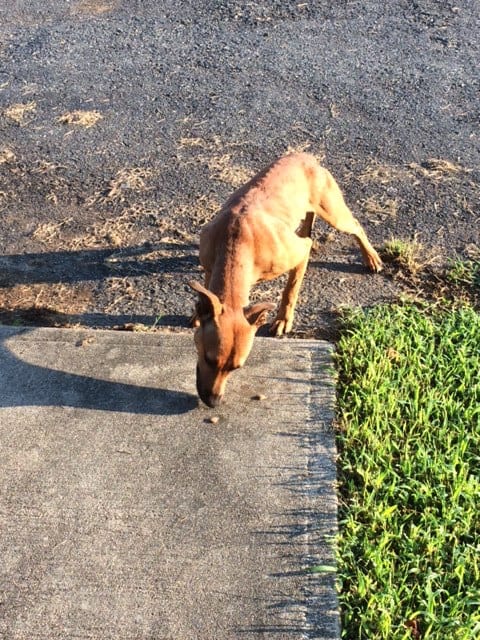 On Sunday morning, Keith and I woke to the sound of a dog barking outside his brother and sister-in-law’s guest farmhouse in southern Virginia. Kim and Margaret haven’t owned a dog in years. The young fellow greeted the rising sun with howls of hunger. Backbones lined the length of his body, and ribs creased his copper fur.

Kim and Margaret had left a bag of kibble on a bench in the sun porch. They told us people sometimes abandon dogs when moving out in the middle of the night.

Keith put a handful of kibble on the front walkway. The dog approached with caution, head down and tail tucked. “Come on, boy, it’s okay,” Keith said while stepping back. The dog gobbled a few nuggets, shied then approached again and ate.

“Here’s some more,” Keith said, grabbing another handful from the bag. The dog stood back and waited. He leaned toward the food as soon as Keith eased back.

“He might want a little water, too,” I said.

When Kim and Margaret walked over from the main house, they said the people who’d lived across the road owned both a male and a female dog. Was she abandoned, too, we wondered.

Abandonment is the root of all fears. We fear we are alone, without a home, disapproved, cast off. Separate.

In truth, we are created in the image and likeness of God. When we connect with this identity, we become who we are: children of God. Not separate, not alone. Never without a heavenly home, never abandoned.

Tuesday morning, upon our return from viewing the total eclipse, almost identical dogs greeted us with eager faces. This time, Keith put two piles of kibble on the driveway. The female started to gobble hers then looked at the male dog’s pile and shifted to his. He moved away to let her eat what she wanted. She took a mouthful of kibble then returned to her pile. The male dog ate the rest of his food while she consumed hers.

“She’s got pups,” I said, “look at her swollen teats.” Sure enough, when the female finished eating, she trotted to the woodshed, shimmied into an opening between the wood slats and foundation, then crawled to the back. We heard the sounds of puppies.

“I see two,” Margaret said to us as she peered under the woodshed.

“That’s fine,” Margaret said, walking back to the farmhouse, “but I’m going to buy another bag of kibble. As long as they’re here, I won’t let the dogs starve.”