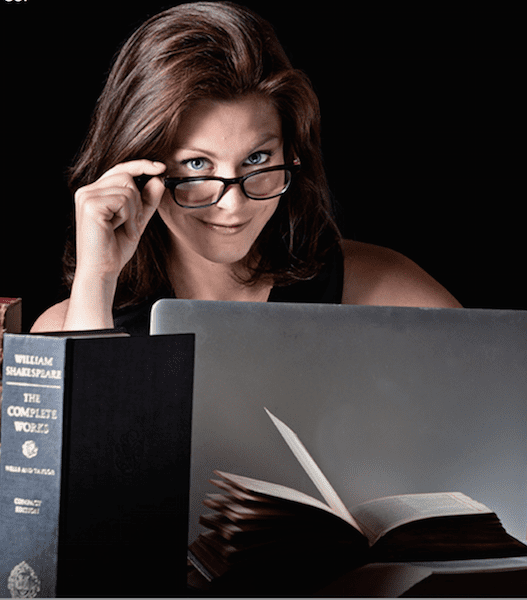 So. Goodnight Desdemona (Good Morning Juliet) by Ann-Marie MacDonald. Two plays within a back-to-the-future play at the Blackfriars Playhouse in Staunton. Seat B3.

In the opening scene, the protagonist, university assistant professor Constance Ledbelly, is writing her dissertation. She has mapped Othello and Romeo and Juliet backward to identify the turning points. By inserting a wise fool, she believes the tragedies would change into comedies as Shakespeare originally intended.

Her longtime crush Professor Claude Night arrives to pick up a review and speech Constance (aka the mouse) has written for him, gratis as usual. He announces that he is taking a position at Oxford, an appointment she hoped to win, and flashes an engagement ring he plans to give to someone else. Then he scoffs at her dissertation topic and leaves.

In a fit of despair, Constance throws all her possessions into a wastebasket. Suddenly—end of Act I plot point—she is transported into the two plays one after the other. In Act II (alternate Othello) and Act III (alternate Romeo and Juliet), she saves the two women’s lives, creating new complications and plot twists.

Goodnight Desdemona (Good Morning Juliet) has a clever premise with a whiff a “what if.”

Last week, I took my manuscript draft off the shelf. For each chapter, I listed the scenes. Now I’m recording what each scene says and does to advance the plot—mapping backward.

Though there won’t be any magical interventions, no chasing “what if’s,” backward mapping is enormously helpful to identify “what is,” that is, what the story really is. I can already identify scenes that say and do more, thus need to slow down and take up more real estate. Others should be absorbed into summary or cut.

Yesterday afternoon, I wished that Ann-Marie MacDonald had done the same.

Writing is a journey of discovery, and so it is for the protagonist Constance. She doesn’t realize she is both author and wise fool until the end, though the audience knows from the beginning. In other words, the story is about the plays within the play because the plot lands in Act I.

Constance displays uncharacteristic courage, standing up to the characters in “Shakespeare’s” alternate plays. But I would have preferred to see less silliness particularly in Act III and more of the protagonist’s transformation. In the last scene, when she transports back to her same office at the university, I wondered if, by changing the plays, she changes her mousey self.

Where does the protagonist land? That is the question for us storytellers. Then map backwards.

Where do I want to land? That is the question for us all.