Did you ever play this game in Scouts?

Everyone lines up shoulder-to-shoulder with the troop leader at the left end of the line. The leader says, “I saw a bear,” and the scouts ask, “Where?” Then the leader makes a big gesture, pointing left arm far to the right, and says, “Over there!” Everyone crouches and points, mimicking the leader.

“I saw a Bear!” “Where?” “Over there!” Big gesture, pointing right arm far to the left so arms are crossed—everyone mimics.

“I saw a Bear!” “Where?” “Over there!” Big gesture, pointing with right leg far to the left—everyone mimics.

“I saw a Bear!” “Where?” “Over there!” Big gesture, pointing head far to the right—everyone mimics.

With arms crossed, right legs to the left, and heads to the right, there’s not a lot to stop them from tipping.

“I saw a Bear!” “Where?” “Over there!” The leader pushes the first scout in the line, toppling all like dominoes. 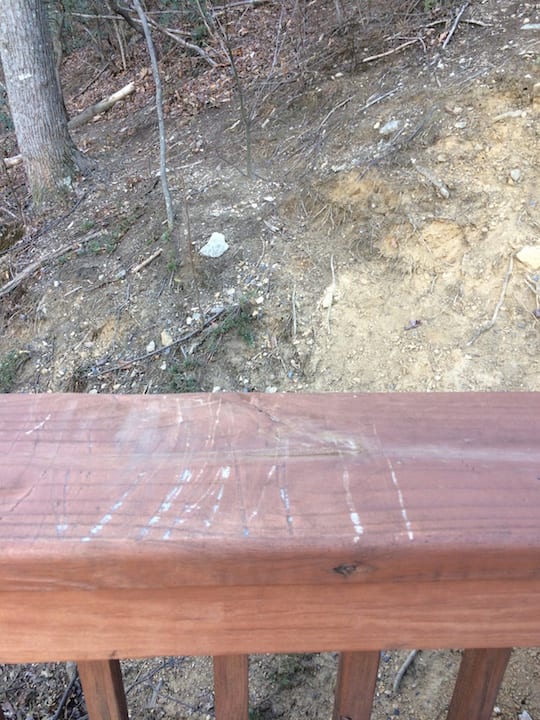 Last Tuesday morning, when I was at Bible Study, Keith heard a scraping sound like someone rearranging the deck furniture. The dogs barked the alarm. By the time Keith checked, whatever made the scraping sound was gone. But he found these claw marks on the deck railing, and another set about three feet, where? Over there!

It’s not uncommon to see bears around here. Keith had seen one ambling along the paved road about a mile from our land before we built the house. During construction, the crew reported bear prints and evidence of scavenging around the crew’s food debris.

A couple of years later, a small bear visited us about 4:30 one morning. Keith had cooked a roast in the Big Green Egg the night before and forgot to bring the drip pan inside. The bear must have smelled that lovely grease because it opened the lid, smashing the cap, and climbed into the Egg, breaking the indirect heat insert.

The dogs barked like crazy, and the bear retreated, taking the drip pan—and a thistle-seed finch feeder. Later we found muddy paw prints on the deck seat next to the Big Green Egg and the mangled feeder in the woods behind the house.

So I can’t actually say, “I saw a bear,” but we don’t leave anything outside that might entice, including bird feeders.

When my sisters and I played the Scout game, we said, “I see a bar, whar, over thar.” And that’s whar Keith and I hope that bar stays. Over thar.