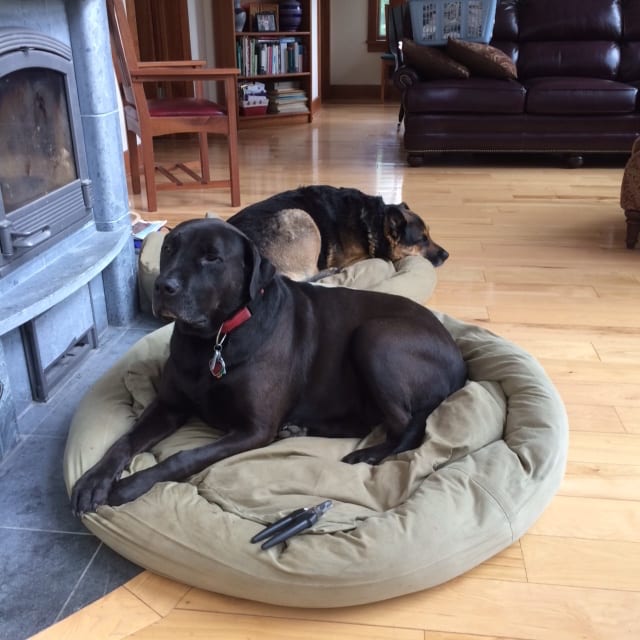 “Good boy, Heathcliff, hold still, this will be over soon,” I say as I grapple with the dog nail clippers. He whines and pants, trying to pull his paw out of my grasp. One of his nails is split and needs trimming so it doesn’t get snagged and torn off during his mountain runs.

Heathcliff hates having his nails clipped, but it’s good for him.

Unlike our girl Freya, who submits to grooming and even enjoys it, Heathcliff behaves like I’m trying to kill him. He’s afraid I might cut his nails to the quick, fearing pain and blood more than Freya does. Why the difference?

“Life is hard,” Richard Rohr wrote in today’s reflection. “The natural survival instinct for the male is to block suffering and pain. Somehow the young male has to be taught how to receive wounding and scarring… and to empathically connect with the pain of the world. In our archetypal psyche and memory, blood flowing from a man’s body symbolizes death, which of course we’re eager to avoid. When blood flows out of a woman’s body, it points toward life, the ability to conceive and carry new life. Maybe this is part of the reason why women are not as afraid of pain as we men tend to be.”

Like Freya, I enjoy pedicures, but there are other good-for-me things I avoid. Recently, a colleague of mine recommended Grace in Addiction, a book about the Twelve Steps, which both Alcoholics Anonymous and Al-Anon use. I’m sure it was obvious to him which of  Al-Anon’s Twelve Steps I was avoiding and needed to practice.

Step Three: “Made a decision to turn our will and our lives over to the care of God as we understood Him.”

As an Al-Anon veteran, I like to think I’ve accomplished Steps One and Two: “We admitted we were powerless over alcohol – that our lives had become unmanageable. Came to believe that a Power greater than ourselves could restore us to sanity.” But Step Three always trips me up when I feel powerless and afraid like Heathcliff.

In a recent interview posted on Mockingbird.com, Mary Karr, a recovering alcoholic, spoke with an interviewer about prayer. “Prayer lessens fear. It reduces self-consciousness, so I attend to the work and kind of forget myself. It’s strange, though—I know praying a steady hour a day would make me a happier human unit, but I don’t do it. Do you know why?” [INTERVIEWER: No.] “Me neither. It’s like, Why not floss every day? I think it’s because my big smart mind likes the idea that it’s running the show, and any conscious contact with God plugs me into my own radical powerlessness.”

Like Karr, I hate feeling powerless. I fear it, and fear makes me angry. And I hate getting angry, too, so I pray… and beg.

“The best prayers are completely silent,” Karr said in the interview. “Otherwise, I do a lot of begging. I just beg, beg, beg, beg like a dog, for myself and those I love. And I do the cursory, ‘If it’s your will . . .’ but God knows that I want everything when I want it.”

Step Three:”Made a decision to turn our will and our lives over to the care of God as we understood Him.”

My ego hates it, but it’s good for me.