For the past several days, high winds with gusts over 20 mph have been blowing here at Vanaprastha, sending our dog Heathcliff into 110 pounds of panic. He paces, his toenails clicking across the wood floors and dog tags jangling. During the day, he wants me to scoot my chair so he can hide under my desk. At night, he pants and muzzles me awake, leaving slobber on the bed sheets.

Meanwhile, Freya sleeps on the floor next to Keith, her head tucked under the bed like an ostrich.

“Ok Heathcliff, let’s go to the basement,” I say, sliding out of bed with reluctance. 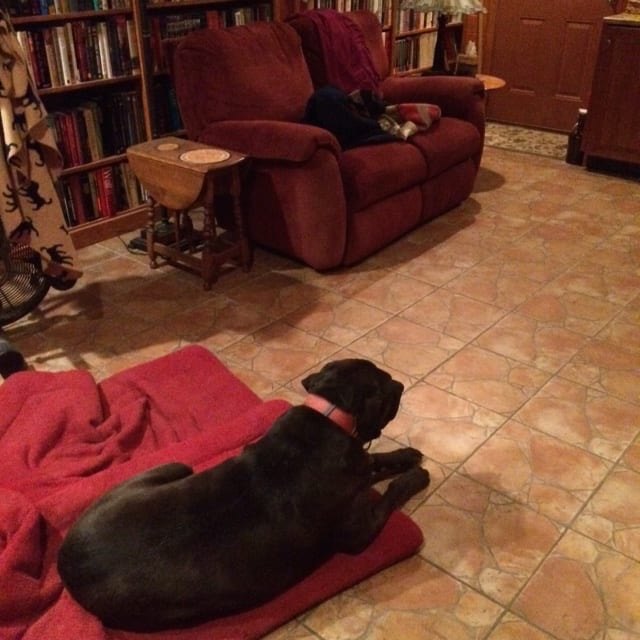 First we head to the kitchen, and I give him a treat. Then he trots down the stairs in front of me, looking back to be sure I’m following. “Down,” I say after turning the man cave lights on low with one hand and pointing with the other. “Go to your bed.” He obeys with reluctance. I sit and lie down on the love seat, curling up and covering myself with two throws, hoping to doze while he quiets.

Finally, he puts his head on his front paws and sighs. “Stay,” I say while climbing the stairs, returning to bed for a little more sleep before morning.

Heathcliff has wind anxiety. Our vet had seen many cases of dogs panicking during thunderstorms but never wind. And yet the treatment is the same: Composure.

It’s an herbal product, that small treat I gave Heathcliff to help take the edge off his stress. The soft triangular-shaped goodie looks and smells a little like a piece of chocolate, which of course it can’t be – not for dogs.

Composure derives from the verb to compose. In practice, at least for me, it’s the other way around. The creativity required for composing derives from composure.

After four minutes, the alarm on her cell phone rings. We open our eyes and our laptops or notebooks. Then we compose.

The other night, wind gusts again buffeted the house. Without waking me up, without a composure treat, Heathcliff walked down to the basement by himself. Progress.

And me? Most of the time, meditation gives me the composure to compose. But sometimes one squall after another buffets my brain. Instead of relaxed breathing in and out, I chase anxious thoughts, panting and slobbering.

Then I wonder about Heathcliff’s Composure. Hmm, smells like chocolate. Maybe I could use some of that. Or maybe I should head to the basement.