“The flowers on the altar are given by Scott and Barbara in honor of their 37th anniversary and Hal and Shirley who celebrated their 64th on that same day,” read the announcement in the December 20th weekly bulletin for Bethany Lutheran Church. Pastor Tim Bohlmann thanked the two couples again at the beginning of Bible Study. Most of us were seated, sipping coffee, munching on baked goodies, and waiting for the Sunday morning scripture lesson.

But first Pastor Tim called out, “Shirley, what’s the secret of your marriage’s longevity?”

“Obedience,” she said. I wasn’t the only person in the room to inhale sharply.

“Wait a minute,” Pastor said. He held up his hand like a policeman directing traffic to stop. “Hal, what’s the secret to your marriage’s longevity?”

I was reminded of Richard Rohr’s December 15, 2015 meditation:

“If you marry with any sincerity and are honest about relationship, you are giving up half of your egocentricity. If marriage doesn’t convert you, these wonderful little beings called children often come along and take away your egocentricity for at least the next twenty years! That’s why I think most people are called to marriage and child rearing. It’s the surest path to death of the ego, if you really allow your partner and children to mirror you, revealing your ordinary and weak self, and also helping you to experience unconditional love. Life has a way of revealing that you are not the center of anything and forcing you to give up control. We must keep growing–and that always implies death to the previous level–which many just will not do. Again and again we must move beyond our narcissism.” 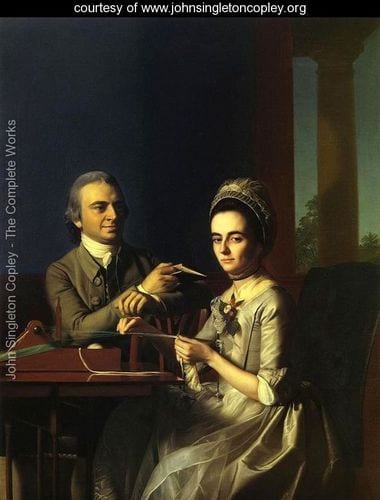 One of my favorite paintings of a marriage is John Singleton Copley’s Mr. and Mrs. Thomas Mifflin. Sarah Morris married Thomas Mifflin, a Philadelphia successful merchant, in 1767. The couple commissioned Copley to paint this unusual husband-and-wife portrait while visiting Boston in 1773. Every detail, from their expensive yet informal clothing and modest yet intimate poses to the objects they hold, shows their personal affection, Quaker faith and political values.

The book in his hand and the threads of a small loom in hers belie traditional husband-wife roles – he the educated, she the handmaiden. He lowers the book to gaze at her with admiration. She looks directly at the viewer while weaving decorative trim, showing her support of the colonists’ boycott on English goods. Sarah Morris was accomplished and witty, and a patriot. Though unable to hold public office, she supported her husband who, a year after this portrait was painted, attended the First Continental Congress, then served in the Continental Army under George Washington and signed the Constitution, having attended that convention, too. Thomas Mifflin was Pennsylvania’s first governor, and Sarah Morris Mifflin was the state’s first lady, and her husband’s.

Surely there were times when Mr. and Mrs. Mifflin were less affectionate, less confident, less happy to see their ordinary, weak selves mirrored in their spouses’ eyes. And our mentor couple at church has been honest about falling short of obedience, as we all do. But both couples kept their ideals in front of them as goals, and they modeled for all who cared to see.