“Excuse me, where’s the switch for the reading light?” I asked the young stewardess. My husband and I had boarded our flight to Europe and settled in our seats. The stewardess rolled her eyeballs and reached over to touch the screen installed in the seatback in front of me. Instantly, a row of icons appeared including ‘light bulb’ and ‘light bulb.’ “Thank you,” I said, feeling rather sheepish, but the stewardess had moved on down the aisle.

Ok, so I haven’t traveled internationally in almost ten years, and a lot has changed. 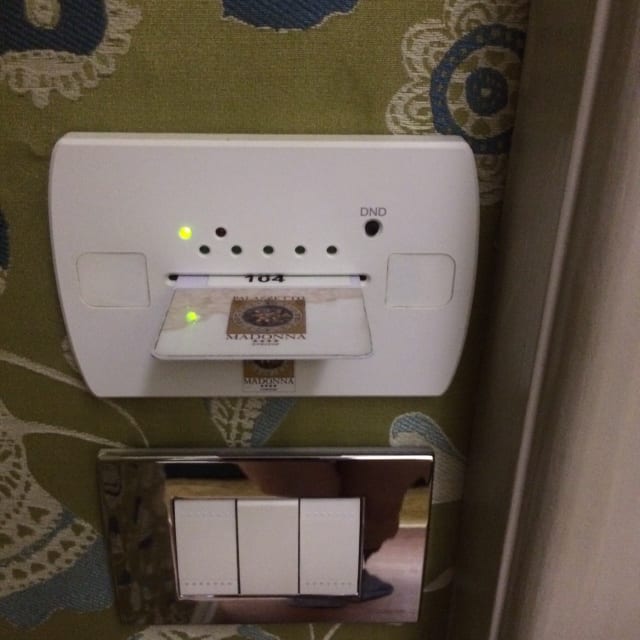 Not all airports, airplanes, ships and hotels have state-of-the-art technologies, but for the most part we gained access by scanning passports, plastic room keys, paper boarding passes and Vaporetto tickets. Chipped cards activated our room’s electricity. We used wireless Audio Vox systems to hear our guides while walking along streets and through museums.

Then there was our hotel room in Venice with a TV viewed through the large mirror opposite the king-sized bed. Just imagine, lying in bed, facing a large mirror and watching CNN…

And that’s all I’m going to say about that.

On the way home, we experienced a strange hybrid of old and new techniques, in part due to increased security. We scanned and were scanned and photographed. We answered questions both digitally and person-to-person and were given stickers and nods of approval to pass to the next checkpoint. There we cued up and waited to enter or exit. Although required to pay the Italian hotel tax in cash, we received local currency using a debit card at ubiquitous ATMs and paid for meals, purchases, transport and parking with credit card.

The airplane we boarded for our return flight also featured touch screens installed in the seatbacks in front of us. But the on-off light switches, steward call and power buttons were mechanical. As I settled in, I noticed the call light above the empty seat in front me was on.

A stewardess with more salt than pepper in her hair appeared beside me. I shrugged my shoulders. She rolled her eyeballs and pushed my call button repeatedly, clucking her tongue and muttering, “This always happens.” When the light remained on despite her button pushing, a light bulb went off in her head. She reached over to the seat in front of me, solved the problem and moved on down the aisle.

Wherever we travel with whatever technology, our humanity follows us, I thought.