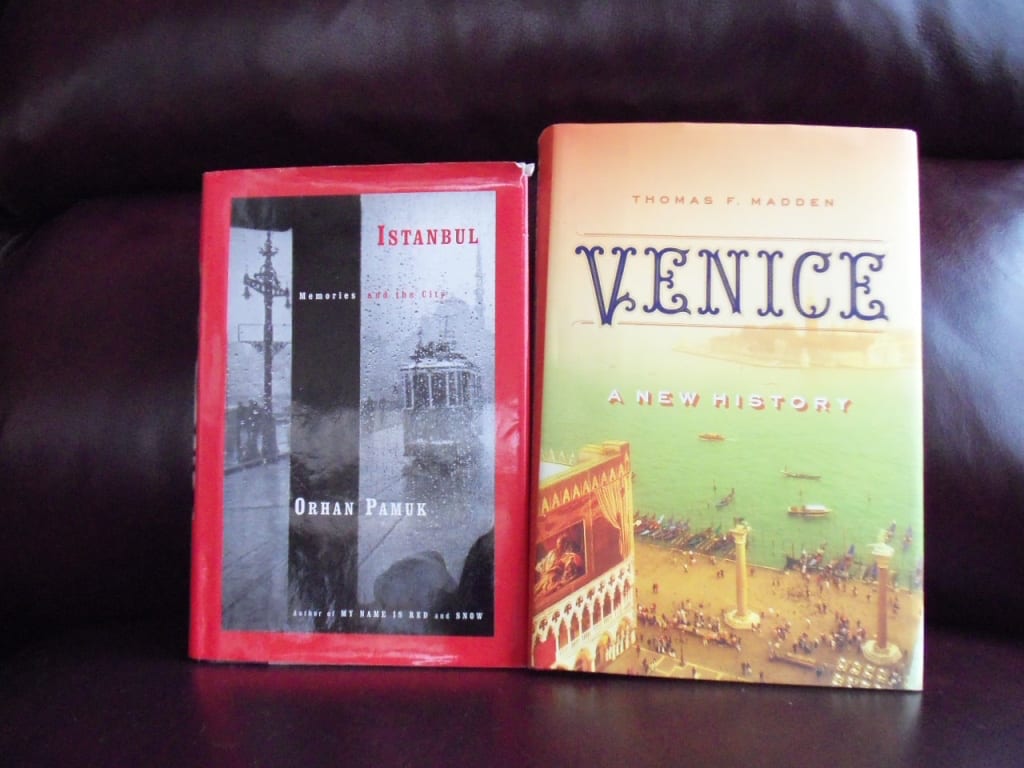 Istanbul: Memoirs and the City by Orhan Pamuk and Venice: A New history by Thomas F. Madden – tales of two cities.

Pamuk, recipient of the 2006 Nobel Prize in Literature, blends history, black-and-white photographs of his family and the city, art and literature to capture the sense of hüzün or melancholy. His Istanbul is a work of creative or narrative nonfiction. This once great city of the Ottoman sultans, whose empire ended after WWI, lives in Pamuk’s memory.

Madden, a history professor at Saint Louis University, uses documents and narratives to capture Venice’s past greatness. From the fall of the Roman Empire in the 5th century to the fall of Constantinople in 1453, the Winged Lion of St. Mark held on and thrived. Yet the advent of global exploration and trade dwarfed Venice’s Mediterranean world. Then, with the rise of Napoleon and nationalism, the Venetian Empire and Republic disbanded.

Istanbul and Venice, tales of two cities for this modern-day tourist.

In advance of our tour, I read fiction, too. Pamuk received the Nobel Prize for his novel My Name is Red, a fascinating murder mystery set in 16th century Istanbul. The court of Ottoman Sultan Murat III, the culture of miniaturist painters, and the city of Istanbul are featured characters. Currently, I’m reading, on a friend’s recommendation, one of Donna Leon’s detective novels set in Venice. Like an insider, a native, the reader walks streets, crosses bridges and navigates waters around Venice following the delightful Commissario Guido Brunetti.

As an essayist and writer of memoir, I wondered about the similarities and differences between the nonfiction and fictional tales of these two cities. Then I stumbled upon this quote from a blog post, “The Lovely Bones: Structure in Memoir,” written by Janice Gray and posted on Brevity’s site.

While narrative nonfiction writers can borrow from fiction and use some of the same techniques, the very nature of the material we are working with dictates we approach storytelling in a different way. Fiction writers start with nothing and create a world. Memoirists start with an entire universe that already exists. We are more like sculptors than painters, relying on the advice of Michelangelo, who supposedly said he made the statue of David by taking away everything in the stone that was not David. We create story by carving and cutting to the bone.

What processes did Orhan Pamuk utilize for writing fiction versus nonfiction? In a 2005 interview “The Melancholy Life of Orhan Pamuk” with Wild River Review Co-Founder Joy E. Stocke, Pamuk admitted, “… in all my books I identify with the main character.” Thus, as the protagonist in his memoir, he thought he “would write Memoirs and the City in six months.” It took a year working twelve hours a day. Pamuk said, “…every day I would wake up and have a cold shower and sit down and remember and write, always paying attention to the beauty of the book.”

Perhaps all writers are sculptors. Historians and memoirists carve the past out of stone. Novelists create their works in clay. Both imagine stories in time and place then sit down and write.