As I drove south on 29 to visit my mother last weekend, I thought about Vivian Gornick’s Fierce Attachments, a memoir about the author’s relationship with her mother. Though younger than my mother, Gornick also grew up during the Depression and War years and was a young adult in the 50s. But Gornick’s world and her relationship with her mother could not have been more different from my mother’s with hers – or so I thought.

Gornick framed her memoir with people in place and time, working-class immigrants living in the Bronx during the 40s and walking with her mother on the streets of Manhattan in the 80s. “We always walked, she and I,” Gornick wrote about her mother. And they talked fiercely, their bond a caustic one. 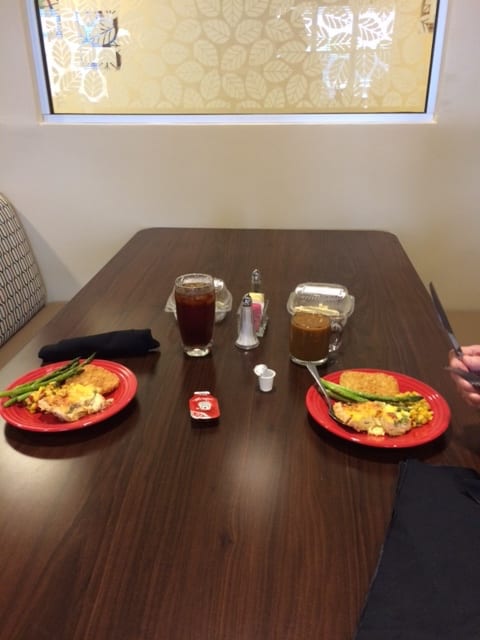 I parked the car in the lot outside Mother’s room, and after a pit stop, we made our way to the Bistro. We checked the menu and decided on ham and broccoli quiche, fresh asparagus, a corn medley and hash browns. After the cashier rang up our meals, including lemon cake and drinks, we navigated towards our favorite booth.

Once we caught up on the news, I asked, “Did your mother ever talk to you?”

“No,” Mother said with a wry smile.

“Did your parents talk to each other?”

“When they did, what did they talk about?”

Typical New Englanders, I thought, rural Maine and Canada, to be more accurate. Not much walking going on there either, unless it was related to farm work, church or snowshoeing to school.

“We listened to the radio in the living room, so we kept up with the news,” Mother said. “We all had our favorite radio programs. Also, Dad went to town and brought back the gossip, and his brother Fred who lived up the road always listened on the party line. We knew because we could hear his clock ticking over the phone. But in person, he’d pretend he hadn’t been listening.” She chuckled again.

There were few secrets in that farming community in northern Maine, and the same was true of Gornick’s community of New York City apartment dwellers. Leaning out windows, running into neighbors in hallways or peering through doorways was the same as eavesdropping, town gossip or Sunday School Picnics. People knew everyone’s business.

Mother continued. “The kitchen was where everything happened. In the winter we moved the dining room table into the kitchen and did our homework or played Rook in the evenings. My mother did needlework.”

As Gornick wrote, “In the kitchen there was pitch and tone, the atmosphere fell and rose, dwindled away, churned itself up again. There was movement and space, light and air. You could breathe. You could live.”

Mother was still talking as we finished lunch and walked back to her room. “Arlene was five years older than me so she and Mother did the cooking and sewing.”

“No, my chores were mostly outside, except for dusting and the hand laundry. I remember when Mother got her washing machine. She polished it all up, really babied it. It saved her a lot of time. She’d start it – exhaust outside the kitchen – and we’d hear Put-Put-Put-Put-Put.”

“Mother always wanted to be a doctor,” my mother said of hers, “and she would have been a good one.”

My grandmother, like Gornick’s mother, made sure her daughter got an education. Though my mother spent plenty of time in the kitchen, she also worked outside.