Mother parks her walker beside a blue cushioned booth in the assisted care dining room while Daughter unloads the red cafeteria tray. Mother wears deep purple corduroy pants and matching white and purple flowered turtleneck, an attractive and serviceable ensemble for a 91-year-old. For 63-year-old Daughter, it’s black boots, jeans and turtleneck with over-shirt to disguise a few extra pounds.

Mother and Daughter sit across from one another and eat the usual lunch fare: soup, sandwich and potato-wedge fries, decaf for Mother, unsweet ice tea for Daughter. Bingo acquaintances wave. Employees pick up trays. Everyone smiles.

Daughter and Mother cover the usual topics – activities, grandchildren, dog antics and old friends. At the end of the meal, the two splurge on dessert because it’s lemon meringue pie. Then Mother asks, “How’s the writing going?”

As Daughter responds with excitement, Mother listens with her entire body. She sits very still, her head facing Daughter and eyes locked. Daughter says, “Well, the manuscript needs to be simplified, refocused and more structurally consistent, blah, blah, blah. So I’m putting this project on hold until after the holidays, blah, blah, blah. In the meantime, I’m working on an essay about three nineteenth-century women, blah, blah, blah.” Mother speaks very little.

At the end of Daughter’s recital, Mother folds her hands on the table and says, “I wish you well.” Daughter smiles.

Back upstairs in Mother’s room, Daughter takes out a photo album. “Remember our trip in 1996, several months after Daddy died?” Daughter asks. “First, we all met for Christmas at my house in Texas.” 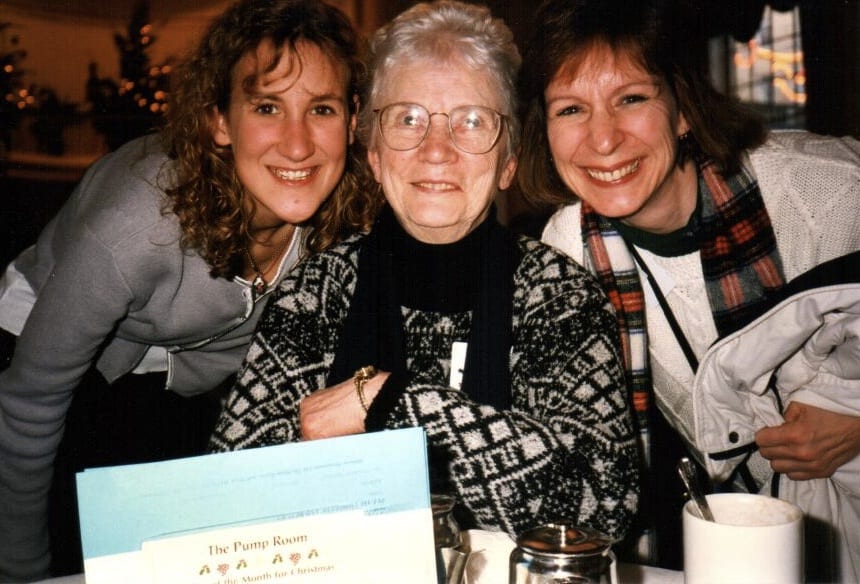 “After Christmas, David went to winter Boy Scout camp, and you, Jessica and I took off for England and Wales with the church choir.” Sitting side-by-side, Mother and Daughter view images of Cathedrals and Castles with younger Mother, Daughter and Granddaughter standing and smiling. “There we are in Coventry and Cardiff, and in Bath sitting in the Pump Room having afternoon tea, just like in Jane Austen’s novels.”

Mother sighs. “I don’t remember.” Then in Salisbury, she says, “That’s Stonehenge. It was windy and cold that day, colder than I’ve ever been, and you and I stayed on the bus while Jessica ran out and took pictures.”

“That’s right, the Thames froze, and there was snow in Canterbury. In London, we hired a guide to drive us around and show us the sights.”

“Didn’t we have a great time?” Daughter asks. Mother smiles.

“I can’t believe all the things I got to see and do in my life.” As Mother talks, Daughter listens with her entire body. She sits very still, her head facing Mother and eyes locked. Daughter speaks very little.

At visit end, Mother and Daughter embrace and kiss goodbye.